Thank God Google Did It

Thank god someone finally did it. Google told the bankers to screw off. And they are going to let the market price the deal the way the market prices stocks every day. Supply and demand will set the price. The people who will pay the highest price will get the shares. Everyone else will have to buy in the aftermarket.

Jim Cramer, who has been begging for this system for years, has a good piece up at RealMoney.com on the potential ramifications of this deal [you have to pay to read it, though].

Since most of you don’t have a subscription and won’t shell out for one just to read this piece (but you should), I’ll quote a section from it.

But then again, the cartel of underwriters will never allow this to happen again unless the Justice Department wakes up and sees what’s been happening for years. Unless the Securities and Exchange Commission realizes that Google just did its job for it. Unless Eliot Spitzer sees the Google model and says, “You know what? That’s the first trust-busting idea I have ever seen happen on the Street.”

Jim’s a good friend of Eliot’s and he will make sure Eliot pays attention to this.

Our portfolio company, Planet Out, which filed for an IPO the same day as Google, will also do an auction with WR Hambrecht, who basically invented the concept in the 90s along with Andy Klein’s Wit Capital. Maybe there’s a trend here. I sure hope so.

Be Gay or Leave

Dr. Bob, a New Olreans artist we have befriended, does all kinds of cool paintings. The one that we got the biggest kick out of last weekend was his Be Gay or Leave piece, a take off on his well known Be Nice or Leave. 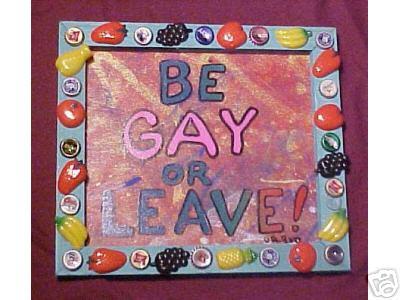 That’s the first thing I thought of this morning when I saw the news that our portfolio company Planet Out Partners had filed to go public.

Planet Out is an amazing story and its largely a story of perseverance against enormous odds. Lowell Selvin and his team have built a great company which is now, in Lowell’s words, “the world’s largest media company serving the gay and lesbian market.” Kudos to Lowell and his team.

Keeping My Thoughts To Myself

Jim commented on my second Utterly Sure post that maybe I should keep my thoughts to myself.

Charlie says on the same post that I am not qualified to talk about politics and I should stick to technology.

Well, Jim and Charlie and everyone else that reads my blog, you should know that if I wanted to keep my thoughts to myself on politics, music, technology, life, love, and anything else that comes to my mind, I wouldn’t be blogging.

If you don’t like what I have to say, disagree with me on my comments section, like many of you have.

Or set up a blog yourself (as you may have done).

But don’t suggest I should keep my thoughts to myself. Because I won’t.

It was sometime in 1998 when my friend Rob Reid came into my office and told me about the new company he was starting. It was called Listen.com and he was going to develop an Internet service that would allow consumers to listen to any song they wanted at any time – all delivered over the Internet.

I thought it was a really good idea, but I had my doubts that he would get the record labels to cooperate. We were having a terrible time at Reciprocal getting the labels to do anything online with their music.

But Rob wasn’t daunted. And he got it done. Listen.com launched Rhapsody in 2002 and it has become a great service. Rob’s company was sold to Real that year and under Real, Rhapsody has continued to develop and add more music.

At this point, there isn’t much you can’t listen to on Rhapsody. I gave my brother Rod a subscription to Rhapsody for a holiday gift in 2002 and he is addicted to it. He came out of his own pocket to renew it. In fact, he just commented on one of my posts that I should get Rhapsody.

My friend Cliff swears by it too. He always checks out new bands he hears about on Rhapsody.

So I bought a one year subscription today. My only complaint so far is I can’t use it on the airplane. I guess that’s what iTunes and the iPod are for. Wouldn’t it be great if they combined Rhapsody and iTunes?

Some of the comments on my blog accuse me of “talking up my game” which means i am using this blog to promote my own investments. I proudly plead “guilty as charged” to that. Dave Morgan, the CEO of Tacoda Systems says that “fred wears his investments on his sleeve”. I think that’s the best way to be in the venture business. Until they prove to be mistakes (which some do), i’ll support my investments as hard as i can.

Speaking of Tacoda Systems, Rafat Ali has a nice post on Tacoda’s new AudienceMatch network. I think this is a big deal. Contextual networks like Google’s AdSense and Kanoodle are all the rage these days, but i think behavioral targeting is likely to outperform contextual and i look forward to seeing how Tacoda and its competitors do with these new networks.

The Bubble Always Precedes the Buildout

That’s the quote that Paul Saffo gave to the New York Times today (he actually said “the bubble days always precede the buildout”) in a story largely about Google’s IPO, but also about what’s next for technology investing.

That’s the way its been for over 300 years of technology revolutions including the industrial revolution, the age of steam and railroads, the age of automotive and mass production, and now the age of technology and telecommunications. The buildout of the information technology age is upon us and I believe it will foster numerous excellent investment opportunities in the years to come.

I call it airblogging. I like to write blog posts on airplanes. I can’t post them until I land, but it’s a good time to write without interruption.

Jazzfest was great as usual. We only go for a three day weekend so we don’t get to take in all the action, but we get enough. We like to “nosh” our way through the fest. That means tasting our way through the food, music, and art instead of dedicating ourselves to a sitdown meal or set of music. It works out best for us.

Every year I get more and more taken with what happens on the fringes of the fest and less and less taken with what is happening on the big stages. Besides fighting the crowds, the music always seems to disappoint at the big stages. This year it was even more so. With the sole exception of Bonnie Raitt and her fantastic piano player Jon Cleary, the shows we saw on the big stages were not memorable. Bonnie, on the other hand, was in prime form and proved one again that blues music isn’t a young person’s game. 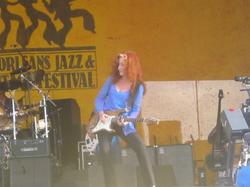 Everyone talks about the Gospel tent. And for good reason. It is home to the most real and most moving music at the festival. When I look at the lineup I never recognize any of these acts, but we always come home with a Gospel disc or two. This year it was Lee Williams and The Spiritual QC’s who hooked me. His rendition of Wilson Pickett’s Midnight Hour and his own I Can’t Give Up just blew me away. They were dancing and crying at the same time in the Gospel tent when Lee and his group were on the stage.

The other place where the dancing and the music are infectious is the Fais Do Do Stage. I have no idea what Fais Do Do means, but to me it means Zydeco and lots of it. I have never been disappointed by an act at the Fais Do Do stage. Maybe it’s because the music is simple and so appealing. I love what the washboard, accordion, and occasional fiddle do to classic rhythm and blues music. My favorite this year was Lil’ Brian and The Zydeco Travelers. Maybe it’s because they had this kid who reminds me of all the pre-teen boys I know up on the stage doing the washboard. Maybe it was the impact of three washboards going at the same time. Or maybe it was the funk infused Zydeco that they play. Whatever it was, I came home with their disc too. 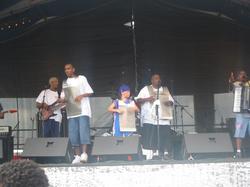 But the most moving moment of the three day weekend was seeing Aaron Neville sing Amazing Grace last night at the House of Blues. I’ve heard him sing that song plenty of times, but it never fails to bring tears to my eyes. He has a completely and totally unique voice that is perfect for soul and gospel music. He played with the entire Neville Brothers clan and we had great seats thanks to Dr Dana. It was a great finish to our annual Jazzfest trip.

We’ll be back next year. And to anyone who likes roots music, I’d suggest you head down for a little noshing in New Orleans next weekend, or if you can’t get your act together that soon try to make it next year.

We saw a great show at Howlin’ Wolf last night. Ben Kweller opened for Death Cab For Cutie. Both were fantastic. We bought Ben’s Sha Sha disc when it came out in 2002 and liked it. After last night, we’ll have to go out and get his new disck, On My Way.

But the highlight of the evening was Death Cab for Cutie. These guys are great. We have The Postal Service disc that i blogged about a couple months ago which features the lead singer from Death Cab. We are going to have to get everything they’ve put out. They are really that good.

I am in this hotel in New Orleans. They have broaband access which is great. You just plug your laptop into an ethernet jack and your are on the Net. And, apparently, on an internal network.

Because when i turned on iTunes this morning, i was sharing music with two other hotel guests.

Interestingly, Branford Marsalis is on the lineup today at the fest. Makes me wonder. But whomever this Branford is, he has password protected his music. Too bad.

Where do you go first at Jazzfest? To the food of course.

I am particularly partial to the Soft Shell Crab Po-Boys, the Barbequed Oysters with Spinach and Blue Cheese, and the Cochon De Lait Po-Boy. 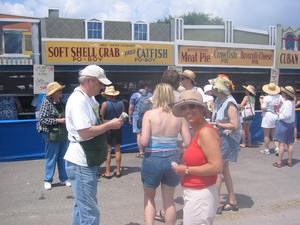