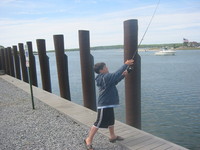 I took my memorial day weekend vacation from blogging seriously.

I’ll be back blogging tomorrow.

Until then, Josh and I are going fishing.

Discuss on Twitter
View Discussions
#Blogging On The Road
May 30, 2004

Blogging Is An Addiction?

The New York Times ran a piece on Thursday called “For Some, the Blogging Never Stops“.

The basic gist of the article is that blogging is an addiction and the people who do it are nuts. At least that’s what I took from the piece.

It’s not surprising that the New York Times would take this tack on blogging. I remember when the Internet was new on the scene back in the mid-90s and the New York Times was constantly talking about all the sex fiends trying to pick up kids on the Internet. The idea that there are new forms of media that they don’t understand is inherently terrifying to the people who run the large newspapers. And so their coverage of new forms of media are inherently biased negatively.

That said, I agree that blogging is a bit of an addiction. But so is gambling, watching TV, being a sports fan, doing crossword puzzles, and lots of other things that people do every day. I am constantly balancing the needs of my family, work, health, and the other things that i do every day with my desire to blog at least daily. And it isn’t easy. My wife gave me a great comic from The New Yorker that I think of every day. The husband is typing away on his computer. The wife is pointing a gun at him and says, “step away from the computer and have an intelligent conversation with me”.

Bloggers aren’t all nuts who blog incessantly all day long like the New York Times makes us out to be. But keeping some balance in our lives is also a good thing. As such, this will be my only post for Sunday of Memorial Day weekend!

It's The Feed Stupid

I was sitting with Dick Costolo, the founder and CEO of Feedburner yesterday. He was taking me through my Feedburner stats page. And it hit me like a ton of bricks. I’ve got two to three times as many people who read my feed as those who read my blog. And the ratio is going up every day. I’ve put all this time and energy into my blog page with House Ads, Adsense, Blogrolls, etc and it’s a total waste of time and energy. Because by the end of this year, the number of people who actually visit my blog will be less than 10% of my total audience.

So, this means that the smart money is going to go into the feed space. Because that’s where the action is. Forget AdSense. I need contextual ads built right into my feed. Forget Typepad links, I need the links built right into my feed. Same with comments. And the feed needs to be two way. Atom has that capability I am told. So let me comment right in the feed. That’s a hell of lot better than Trackback.

For all the creativity that blogs have unleashed, its just the tip of the iceberg. RSS is a fundamental “good technology” (ie open and extendable) that is going to impact the Internet in the same way that open standards like HTTP, HTML, and MP3 have.

I am sure that many of your have figured this out already. To which I say – Good, what are you doing with RSS? I want to hear about it.

This band reminds me of a lot of the bands I used to listen to in the mid-80s.

They’ve got a great sound and the song “Take Me Out” is a total romp.

I am surprised it isn’t a big radio hit.

I first found this album on Burned By The Sun.

Damn. I must be getting old. Or hanging out too much at the Yale Club (that’s an inside joke between me and Bevonovo).

Jeff Jarvis pointed out this great post about Broadcatching. I’ve got to figure all of this out. I think there’s a pony in here somewhere.

OK. I confess. I am ignorant about this one.

Motts commented on my latest A Ghost Is Born post with a link to the Wilco tour opener. They were called Bit Torrents. I downloaded it and got a file but I can’t figure out how to play it.

The Jason Calacanis talked about working in his virtual office in Bryant Park with his headphones on listening to Howard Stern Bit Torrents.

I hate being ignorant. WTF are Bit Torrents?

This guy is great. We saw him live in New Orleans and i’ve been into his two discs big time ever since.

The PopMatters blog has a great interview with him up right now.

Spam Wars - The Next Phase

It’s my belief that the saturation of spam filtering technology across enterprises and consumer ISP services has dramatically reduced the amount of spam coming into mailboxes. There is more to be done for sure, but we are beginning to win this war, and its about time.

So where is the next front going to be? I think its going to be in area of false positives and differentiating between who the “good commercial mailers” are and who the spammers are.

There aren’t many people who know more about where and how this next war against spam is going to be fought than Matt Blumberg whose company, Return Path, is at the front lines in this next fight.

Matt has two great posts on his blog this morning that are must reads for anyone who cares a lot about this issue.

The first is about sender authentication.

The second is about the misconceptions in the market over Microsoft’s Bonded Sender program.

I just added a section on the top right of my blog called “House Ads”. I will use this section to promote things that are of interest, directly or indirectly, to me. There is no charge to anyone or anything I promote on this section, but I would like to get traffic reporting back to me in return. I am curious to find out if anyone actually clicks through on these house ads.

One of the things that I am noticing more and more of in the blog world are Obituaries.

Jerry did one last week for Syd Hoff.

Closer to home, I did one back in February for my grandmother.

When i visit the Key People page at Blogpulse, the top “bursty” names are almost always people who’ve recently died.

Last week it was Tony Randall.

Today it is Richard Biggs, who played Dr. Stephen Franklin on a show called Babylon 5. I’ve never seen that show or heard of Richard Biggs, but nonetheless I am sorry to hear of his passing.

I think someone could do something great with this. Why is it that the New York Times is the paper of record when someone important dies? The web could do a tribute infinitely better with hundreds or even thousands of tributes being published every day. Something to think about.