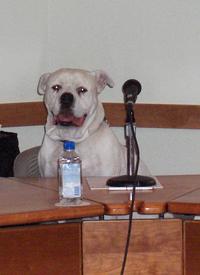 There was a great breakfast panel today talking about the future of advertising.

We’ve got the CEOs of WPP, Aegis Media, and DDB, the guy who runs marketing for Coke’s brand, the CEO of William Morris, a couple of great Internet entrepreneurs, and a even a dog sitting around a big round table talking about advertising and its future.

It’s clear that “image” ads are struggling to compete with “call to action” adds and its going to get even harder as digital media develops better tools to target these action oriented ads to the right audience at the right time.

The most interesting part of the panel though was the heated debate that developed between the big agency guys and the Internet entrepreneurs. The entrepreneurs were arguing that we are experiencing a major transition in the world away from big brands and big media. They argued that individuals no longer trust the establishment and that credibility, authority, and connections among individuals is what matters most.

It was fun to watch the fireworks.