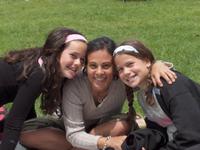 The common wisdom about camp visiting day, as expressed by my friend Fred who’s about fifteen years ahead of me in raising kids experience, is that its the worst day of a parents life.

I know why he says that. Its an emotional roller coaster. You haven’t seen your kids in a month, you are dying to see them, they are dying to see you, the first 20 minutes are amazing. Then you spend six hours walking around, talking, catching up, but the thought of leaving hangs over the whole day, and then the leaving is awful. At least it is for many parents. I’ve seen kids flip out (and parents too) when its time for the parents to leave. 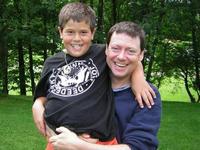 It’s never been like that for us. For some reason, each of our kids have loved camp from the minute they got there and they never want to leave. Jessica, our oldest, is in mourning for close to a week when she gets back. She’d stay there year round if she could.

So visiting day for us is a lot better than the common wisdom. The emotional highs are all there, but we don’t get the lows for the most part.

Josh, who is at camp for the first time, did say to me, “I wish you could stay.” I guess he wasn’t thinking about leaving so his wish was for me to hang around for the next four weeks. That’s an appealing thought, although his bunk of 10 eight year old kids stunk pretty bad. It wasn’t that appealing. 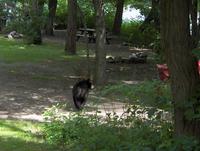 We did take the kids down to Phoenicia, home of Sweet Sues, for some ice cream after lunch. While we were in town, we saw a baby bear running around, probably looking for his mom. We got a picture of the baby and then hightailed it out of town before the mom showed up.

The best part of camp is the friendships the kids make. They spend 2 months living with each other day and night and build incredibly tight bonds. The last activity before we left was a performance by the kids of songs they make up to popular tunes. Each age group of kids makes up a different song and performs it. 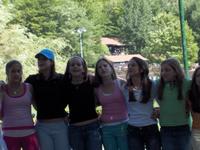 They hang on each other and sing the songs as loud as they can. Here’s a picture of Jessica and her friends, who she’s been going to camp with for 6 years now, performing their song.

That’s what camp is all about in a nutshell. It was a fitting closing scene.