Jet Blue and A Rod 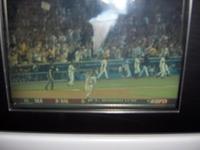 Cross country flights are always a drag. Five to six hours stuck in a crowded plane is not my idea of fun. Tonight I had the added bonus of sitting in the middle seat at the back of the bus.

But Jet Blue makes it a lot easier. They’ve got TV just in case the book’s no good and the laptop battery dies.

Tonight I turned on the Yankees/Oakland game and was treated to some great entertainment. It was a hell of a game. Each time kept coming back again and again.

Sheffield hit a two run shot in the bottom of the ninth to send it to extra innings which is just what I needed since the flight wasn’t arriving until midnight.

And then in the bottom of the 11th, facing a rookie pitcher who fooled him with a big curve on the prior pitch, A Rod yanked a two run shot to end the game.

I took a picture of A Rod rounding first base. Not a great picture, but you get the idea. Live entertainment at 35,000 feet!