Brad Feld does an excellent job with his post on the “double dip” otherwise known as the Participating Preferred.

His post is relatively long but absolutely essential reading for any entrepreneur that has never seen a Participating Preferred before.

While Brad didn’t take sides, I will.

I insist on participating preferreds and get them in almost all of my deals eventually. Maybe its my “east coast” heritage. But I believe that the risk capital has the right to get its cost back and then share in the profits with the other shareholders who do not have capital at risk.

That’s how we do it with our investors, called LPs. And it works fine for us. And I think the same should apply to the entrepreneurs.

I also believe in caps. I think double dips are too generous if the investment works out very well. And so I generally always agree to cap them. When and how depends on the deal.

I generally don’t like the “multiple participate” as Brad calls it. There are some cases where its needed to structure around certain valuation and ownership issues that crop up. But its not a good way to align interests among shareholders and causes a lot more problems than it solves. I try to avoid it as much as I can.

That’s my view of the double dip.

Several weeks ago it was Brad beating me to the Venture Capital Cliche post I wanted to do.

Now, Matt beat me to the New Deal post I wanted to do about how “new media” is governed by a fundamentally different relationship between the consumer and the media he/she consumes.

Matt outlines pretty much all the essential aspects of this New Deal. I have a few wrinkles I was working on and I might add to his New Deal over the next week.

Well done Matt. I can’t believe he and I came to the same conclusion without ever discussing it.

Tim commented on my last Charting Bush post that futures markets generally provide the best forecasts. In principal, I agree. Tim pointed me to a futures market run by the University of Iowa Business School.

This is pretty cool, but I’d like a price chart instead of just current prices. Trend is as important to me as absolute value.

If I read the quotes correctly, these markets are forecasting a very very narrow Bush victory right now.

I’ve seen this reaction a lot. And it rarely works. First, customers are smart enough to realize that if they are getting something for free, its either not worth anything, or it’s a short term deal that is going to cost them a lot down the road.

In the early days of Multex, First Call tried this approach. It was anti-competitive for one, but we didn’t even have to fight that fight. We just pointed out to the customers that if they allowed the market to evolve into a single provider of electronic research services, it was going to cost them a lot down the road. Some customers took the free deal. But many didn’t. Enough customers went with us that we had a business. And our customers, once they made that leap, became our biggest supporters. They were with the upstart, the David fighting the Goliath. And that was a big factor in our success.

Second, investors are smart enough to realize that if the market is so good that a incumbent is willing to give the product/service away for a while to protect the golden goose, then there are dollars and returns to be gained by investing in that market. In fact, I have often found that by providing an upstart with the financial cushion to survive price competition, I have been able to get a good piece of a good opportunity at a very attractive price. And just as often, the investment itself is a signal to the incumbent that price competition isn’t going to work.

Finally, price is rarely the only issue that customers focus on. They want a good product or service with a good support organization behind it that has the money to continue to innovate and deliver more value every year. That doesn’t happen by squeezing every dollar of profits out of a company. Smart customers are wary of a deal that seems too good.

So I told my friend to hang in there. That he should take the price competition as a sign that he was doing well. That he needed to take the message of his better service to the customers and get them to pay him even though his competitor was willing to give it away. And I urged him to close a financing to support him through the price war. I suspect he’ll do fine.

Oh man. After several months of no comment spam, I got slammed this week by comment spam selling all kinds of drugs on my site. It took me at least 15 minutes to delete it all. I thought that TypePad had figured out how to stop it, but I guess not.

We went to see Golden Smog at the Bowery Ballroom last night. This is a “supergroup” featuring members of The Jayhawks, Soul Asylum, and sometimes Jeff Tweedy of Wilco. Last night they played without Jeff but had a number of good stand-ins.

I wish The Jayhawks were as fun in concert as Golden Smog. Something about this lineup brings out the best in Gary Louris. They clearly have a lot of fun up on the stage and it makes for a more entertaining concert.

They played most of the songs on their two albums, but the highlight of the night were the covers.

The best was a fantastic rendition of The Talking Heads’ Life During Wartime which mid-song turned into Carly Simon’s You’re So Vain.

Golden Smog is a supergroup featuring members of The Jayhawks, Soul Asylum, and Wilco.

They are playing at Bowery Ballroom tonight and I am going with a friend.

I am looking forward to seeing them.

So my MP3 of the week is Golden Smog’s Looking Forward To Seeing You.

If you want an easy and good demonstration of AdSense and contextual targeting at work, just click on the various categories on the left of my blog.

I just did it and its pretty cool.

I was reading Steve Goldstein’s AlacraBlog the other day and saw his post where he recommends blogs for entrepreneurs to read.

He described my blog as follows:

Although Fred covers music, politics and general business issues in addition to the VC world, http://avc.blogs.com/ is both valuable and fun to read

I use my blog to talk about a lot of things that interest me and there are certainly going to be a lot of posts that entrpreneurs might not be interested in.

So if you are just interested in venture capital and technology, I’d suggest you bookmark this link or use it when you link to my blog.

The one thing I can’t figure out how to do is generate a RSS feed for the venture capital and technology category. If you know how to do that in TypePad, I’d love to know. 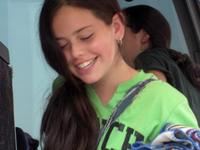 Two months ago I posted a bittersweet post about dropping off my kids at camp for two months.

Well yesterday we got them back.

The Gotham Gal and I did have a great two months. We went out most every night. If you read her blog, you can get a sense of the places we ate, shows we saw, and movies we went to.

The moment the first kid, Jessica, walked off the bus was pure joy. 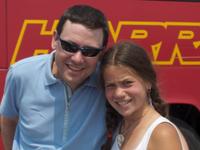 We hung out for a few minutes, the kids said their last goodbyes, we took a few pictures, and then it was off to the beach for the weekend. 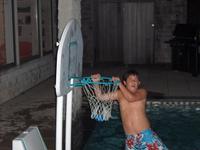 The rest of the day was hanging with the kids, playing in the pool, and getting to know each other again.

It’s great to have them back.