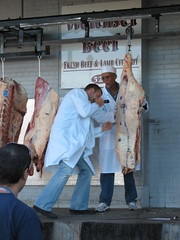 Jack Boxing The Side of Beef
Originally uploaded by fredwilson.

There’s a new TV show on Fox this season called Kitchen Confidential based on Anthony Bourdain’s book of the same name.

The star of the show, who plays Anthony’s character, Jack, is Bradley Cooper who was great as the jerk boyfriend Sack in Wedding Crashers.

I know some people involved in the show so we stopped by a shoot this morning on our ride down the west side highway. They were shooting a scene in the Gansevoort meat market where Jack decides to treat a side of beef as a boxing bag.  The guy from the meat supplier turns out to be a boxer and shows Jack how to do it with super fast hands.

It was funny to watch and I am sure it will be funny on TV.

I’ve seen the premier and I can say with confidence that this is going to be a really funny show.  It’s produced by Darren Star who did Sex and the City so its got the A team behind it.

The series debuts on Monday, September 19th at 8:30 on Fox.  Set your Tivos accoringly.