In this post John Battelle, one of the most astute Google watchers, talks with his friend John Heilemann (who has also written about Google recently) about Google and whether they are facing a moment, much like Microsoft faced in the early 90s, when the world turned against them.

I have been wondering this out loud for a while, starting with my "Starbucks of the Internet" post and continuing to this day.  I’ve even called Google lame which I think they have been in their implementation of many of their new services.

It’s a natural reaction for a VC, who funds early stage companies that find themselves facing down Google, to both worry about and think hard about Google.  And I don’t like what I see all that much.

John says the "worm turning" moment is "when the world realizes that the company is *too powerful* and its ambitions are *too great.*"

If that is the definition, then we’ve clearly reached that moment, maybe as long ago as last year.

Mark Pincus says it best in his post about Google Base:

my take is google has chosen between two paths. one which i thought
they were on was to be a platform to enable great things on the web.
google could have powered everything with its search engine, ad
infrastructure, massive crawling and computing power. it could have
been a democratizing force, enabling small services to flourish in
being found and in serving them a platform on which to innovate.

instead google has chosen to be merely another big corporate titan.
like microsoft, it’s choosing to go for the gold, enriching their
shareholders rather than enabling industries. msft started with the
promise of an open platform that would unite and enable an industry.
small companies could just build software and stop worrying about
platforms. this platform turned out to be a trojan horse as msft
usurped its power. initially the company enjoyed great profit growth
just selling the platform but soon had to look at the apps on top to
keep growing and then further to the utilities around it and any other
good idea it could eat up.

like msft, google is now going after every other oppty around it,
taking advantage of its trojan horse position. suddenly every company
is at risk. companies as far away as walmart have to have a ‘google
strategy’. today, vc’s ask every new startup how they will compete with
google. (at least we dont have to answer the msft question any more.)

One of the hardest things to know when you are running a growing company is how your pay scale relates to "market".

One reason is that there isn’t good data on small compaines and there is a particular dearth of information on the slots below the senior management team.

And comp structures don’t change as fast as the company’s comps.

So Matt Blumberg has proposed a great idea this morning on his blog.

His company Return Path is creating a cooperative survey for companies in the 50 to 250 person size range.  Return Path will supervise the whole project.  They’ll hire a consultant to do the analytic work and each company will pony up $1000-$2000 and all their comp data.

Each participating company will get a copy of the report.

What a great idea.  If you have a company in that size range and want to participate, send an email indicating your interest to [email protected] and they’ll contact you.

Adam Lashinsky is one of the top guys covering the vc and tech industry in silicon valley.

This week he has an article about cragslist in which he suggests that if Craigslist was fully commercial, it would be doing $550mm in annual revenues.

I am not in a position to debate that number, but I’ve long said that craigslist is one of the companies we admire most at Union Square Ventures.  It’s got 18 employees.  Surely it would take more than that to handle $550mm in revenues, but maybe not a lot more.

Something to think about.  Hard.

My favorite of Evan’s 10 Rules is "Be Balanced".

There are many ways to create a "balanced" culture in your company, but one of them is to foster community service.

Here’s a post by Matt Blumberg that talks about how his company, Return Path, does that.

When an investment doesn’t work out, the first attempt to salvage the deal is typically to look for a buyer.  When that doesn’t pan out, the next move is often to look for a company to merge with. Usually its another venture backed company.  And many times both companies are struggling.

I have learned to resist the urge to merge two poorly performing companies because as Bliss used to say, "two lemons won’t make lemonade".

It’s easy to convince yourself to merge two poorly performing investments. You might have a good team in one company. You might have some great technology in another. The combined investor group might be able to support the merged company through a new business plan.  It’s seductive reasoning.  But its flawed.

The first thing I’ve learned is that merger of equals, whether they are really small companies or really big companies are incredibly hard to pull off.  You really need a buyer and a seller to make a transaction work. Someone needs to be in charge and in mergers of equals, its not often clear who that is.

The second thing I’ve learned is that two products/services that are struggling are at least twice as hard to get working as one product/service that is struggling. Combining forces actually makes it harder to get the company moving in the right direction because you have more problem children to deal with.

When you have an investment that isn’t working, its critical to do something about it and not just put more money into it and hope for the best. I think getting the company sold is a great solution. If that doesn’t work, it might be best to simply shut the company down because the idea of merging with another struggling startup is generally a really bad idea.

It must be the time of year for "how to" lists.

Nick Denton has a list of the things you need to do a startup.

But at the end, Nick gives me a very nice plug.  I hope I can live up to that billing.  It’s too bad that I can’t invest in every startup that follows Nick’s advice.  That would be fun, but I’d never be able to get anything done.

If you use Delicious and Firefox, do yourself a favor and check out the new delicious firefox extension.

It puts delicious posting and viewing right next to the home button in Firefox.

And adds delicious search as an option in the firefox search field on the upper right.

And a bunch more, all of which is explained here.

And it takes all of 5 seconds to install.

Microchunking means taking an object and reducing it to its smallest usable part.

It doesn’t mean reducing it to something smaller than is usable.

One of my biggest pet peeves is the magazine industry’s habit of taking an online story and breaking it into multiple pages.  It forces you to click at the bottom of the page to get to see the next page, thereby generating more pageviews.

Whenever I link to a magazine story, I click on the "print format" link to get a full page of the story and link to that.

That’s as microchunk as I want it.

Evan Williams of Odeo has a great ten rules list up on his blog for web startups.  If you are doing a startup of any kind, give it a read.  It’s very good.

Many of these rules have been said before by others, but that doesn’t mean that they are any less useful.

#3: Be Casual
We’re moving into what I call the era of the "Casual Web" (and casual content creation).
This is much bigger than the hobbyist web or the professional web. Why?
Because people have lives. And now, people with lives also have
broadband. If you want to hit the really big home runs, create services
that fit in with—and, indeed, help—people’s everyday lives without
requiring lots of commitment or identity change. Flickr
enables personal publishing among millions of folks who would never
consider themselves personal publishers—they’re just sharing pictures
with friends and family, a casual activity. Casual games are huge. Skype enables casual conversations.

#9: Be Agile
You know that
old saw about a plane flying from California to Hawaii being off course
99% of the time—but constantly correcting? The same is true of
successful startups—except they may start out heading toward Alaska.
Many dot-com bubble companies that died could have eventually been
successful had they been able to adjust and change their plans instead
of running as fast as they could until they burned out, based on their
initial assumptions. Pyra was started to build a project-management
app, not Blogger. Flickr’s company was building a game. Ebay was going
to sell auction software. Initial assumptions are almost always wrong.
That’s why the waterfall approach to building software is obsolete in
favor agile techniques. The same philosophy should be applied to building a company.

#10: Be Balanced
What
is a startup without bleary-eyed, junk-food-fueled, balls-to-the-wall
days and sleepless, caffeine-fueled, relationship-stressing nights?
Answer?: A lot more enjoyable place to work. Yes, high levels of
commitment are crucial. And yes, crunch times come and sometimes
require an inordinate, painful, apologies-to-the-SO amount of work. But
it can’t be all the time. Nature requires balance for health—as do the
bodies and minds who work for you and, without which, your company will
be worthless. There is no better way to maintain balance and lower your
stress that I’ve found than David Allen’s GTD process. Learn it. Live it. Make it a part of your company, and you’ll have a secret weapon.

Looking Under The Hood 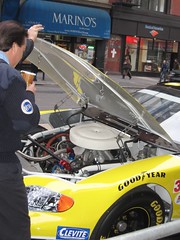 Looking Under The Hood
Originally uploaded by fredwilson.

As I was walking to work this morning, I saw two race cars sitting in front of the Flatiron Building.

It seems that Nextel is doing something called the Pit Stop Tour and these cars will be in front of the Flatiron Building all weeek.

If you live in NYC, you should stop by and look under the hood, like I did this morning.