The Strokes are a great band.  Most people think their second record, Room On Fire, was a weak follow-up to their debut, Is This It.

I don’t feel that way.  Both records have four or five great songs on them.

So we are eagerly awaiting their third record, First Impressions of the Earth, due out in early January.

The first single of that record, Juicebox, has hit the airwaves and the Internet.

So I’ll will make Juicebox my MP3 of the Week.

Our new weekly podcast is up.

We wrapped up a great long thanksgiving weekend with a podcast. Jessica has final exams next week and opted out to study for them.  So Joanne, Josh, Emily and I did this one.  We talked about thanksgiving dinner, a bunch of new and old movies, and the pain of playing football at age 44 with a bunch of big teenagers.

To listen in iTunes or on your iPod, get iTunes (version 4.9 or higher), then
select Advanced, Subscribe to Podcast, and then enter this into the
box:

In Defense of SOX

It is fashionable in the venture capital business to hate Sarbanes Oxley, aka SOX.

Most every VC I know of thinks it is bad for the VC business.  Maybe it is.  It certainly makes it harder to take companies public.  And there is so much work that has to be done by a company to become "SOX compliant", particularly section 404 compliant, that many companies can’t even think about taking that on while trying to grow their business.

Brad Feld got me thinking about this issue this morning with his post and link to Niel Robertson’s post on how to automate SOX 404 compliance.

I believe that before SOX, way too many companies went public before they were ready to be public companies. They didn’t have profits, they didn’t have financial organizations capable of building and mantaining internal controls, they didn’t have complete management teams, and they often didn’t even have reality tested business models.

And once one company in a sector went public, they all went public, driven by a desire to maintain a level playing field with their competition. Chapter Two of Hackoff.com has a good description of those days.

I recall the late 90s when companies would hire the CFO weeks before the IPO road show.  I recall that happening with a few CEOs as well. It was crazy.  And it’s no wonder that so many of those companies ended up being bad public companies.

With SOX, that really can’t happen. It takes a year or longer to prepare to become a public company.  We have several companies in the Flatiron portfolio that are going through this process now.  And as much as I hate seeing them spend the money on SOX consultants and staffing up their finance departments, I see it as an important test of whether the company really wants to be a public company or not.

There are plenty of ways to raise capital privately so the public markets aren’t always the best option for raising capital, particularly for young companies.

And the M&A market is very healthy, so going public isn’t necessarily the best way for the insiders to get liquid on their investment.

The investment banks are supposed to be the gatekeepers of the IPO process, deciding which companies are ready to go public and which are not. Back in the day when they really "underwrote" the public offerings and took the risk on whether the deals got done or not, maybe they did provide some kind of readiness filter, but I don’t think that investment banks can be relied upon to be the quality filters anymore. They make too much money on the IPOs, regardless of whether they are successful public companies, to be truly objective about the process.

So I think its a great thing that SOX has put a high hurdle that companies need to jump over to become public.  In the past four years, we have seen that good companies can go public, but it takes a lot of work and preparation to do that.

My friends at Broadview (now part of Jeffries & Company) used to have a chart of the performance of venture backed IPOs six and twelve months post IPO.  A sizable majority of them were trading below their offering price by the time that the VCs could get out.  They made a persuasive, if somewhat self serving, argument that selling venture backed companies provided better exits than IPOs.

I’ve often felt that was true for all but the very best portfolio companies.  Now with SOX we have a hurdle that forces entrepreneurs and VCs to be patient and prepared for the IPO process.  I’d be interested to see that Broadview chart pre and post SOX.  I bet it looks better now.

Jessica has a end of semester project in her high school technology class.  She is supposed to describe what her every day computer will be like in the year 2030.

She learned all about Moore’s Law in her class and figured out that the PowerPC processor that runs her Powerbook G4 laptop will have more than 2 trillion transistors on it and process over 200 trillion operations per second (way faster than the current world champ the IBM BlueGene which does 70 terraflops).

So she sat down, armed with this information, and started to imagine what she could do with her computer.  She thought about all the logical things, smaller, lighter, smarter, etc.  But she was still stuck in the world she knows; monitors, keyboards, memory chips, wifi, CDs/DVDs, etc.

So I asked her if she thought she could talk to her machine and if it would talk back?

Would she need a keyboard and a mouse if she could do that?

Would she need a monitor if there were $20 flatpanels everywhere that she could use when she needed a monitor?

What if all data could be wirelessly sent in and out of her computer?  Would she need the CD/DVD, the memory?

Would her computer be her phone?

Mind bending stuff for sure.  And I am not sure she wanted her mind bent when she had a project to complete.

From 1964 to 1966, a wave of young british bands came to the US and had a big impact on the style and development of rock and roll music.  Led by The Beatles, the invasion included The Kinks, The Stones, The Animals, and a host of other influential acts. I am wondering if we are witnessing a similar, maybe less significant, wave with bands and artists from the nordic region right now.

I began to pay attention to this part of the world when I fell for Bettie Serveert, who are from Holland, in the early 90s. I love Bettie Serveert so much that I put Palomine in my Top 50.

Bjork, from Iceland, was also a major musical act in the 90s.

But in the past couple years, it seems as if the amount of quality music coming out of the nordic region is exploding.

Last year’s big find was Sondre Lerche, from Norway.  This guy is a musical genius. I can’t wait for his next record, although rumors are there may be not one, but three in the works.

Then I discovered Sigur Ros.  This band is from Iceland and you can hear the similarities to Bjork, but the music is harder more intense.  I love their new record Takk… and its in heavy rotation and also on my top ten for 2005 list.

And then Jessica found The Shout Out Louds, from Sweden.  Their record, Howl Howl Gaff Gaff may be the most played record of the moment in our house as everyone loves it.  They sound a lot like The Killers but have a more "garage" sound.

So we are into our nordic invasion and are enjoying it.  If you know of other nordic artists we should be checking out, let us know.

I just finished Chapter Seven of Tom Evslin’s Hackoff.com, a murder mystery that takes place in the Internet bubble and aftermath.

This chapter takes the reader through the practice of doing a secondary offering.  A secondary offering is a public offering of shares in a company that usually takes place around six months after the IPO.  There are two primary purposes of doing a secondary, the first is raising more capital for the company, and second allowing the insiders (management and VCs) sell a portion of their stock in an orderly manner.

Tom does a good job illustrating how all of this works.  His narrative on the negotiation between the VCs and the management over allocating the secondary is particularly enjoyable reading (particularly having lived through that exact negotation with Tom).

But the best part of this chapter is Tom’s description of doing a secondary while the market for his stock is collapsing.  Tom lived through that particular hell and he tells the story well.

Regardless of whether you plan to read the whole book, Chapter Seven is a great read and can easily stand on its own as a wonderful lesson on secondary offerings.

As I go back over my top 50 list, the one artist who I can’t believe I left off is Stevie Wonder.  I fixed that this morning by adding my favorite Stevie Wonder record, Talking Book, to the top 50, making it 52 records in total.  I suspect I may do that a few more times.

In the mid 70s, Stevie Wonder put out four records in a row that are all must haves in my book, Talking Book, Innervisions, Fulfillingness, and Songs In The Key of Life. The middle two of these four, Innervisions and Fulfillingness, are less well known, but are just as good, possibly better.

After Talking Book, the Stevie Wonder record I pull out most often is Innervisions.  I love Too High, Living For The City, the funky Higher Ground, Don’t You Worry ‘Bout A Thing, and the final song, the scathing indictment of Richard Nixon – He’s Misstra Know It All.  That’s over half of the record.  That’s how good this record is.

Get it on Amazon

or listen on Rhapsody. 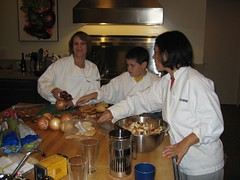 Thanksgiving is about family and tradition.

It’s one of my favorite holidays along with Halloween and Christmas.

This picture shows three generations of our family making stuffing. The recipe never changes and gets passed down from generation to generation.

PS – Thanks to Eye of Einstein for the cool photo of the two turkeys that I have on the upper left today.

Discuss on Twitter
View Discussions
#Photo of the Day
Nov 23, 2005

Most everything imaginable has moved online and so it shouldn’t be a suprise that the blood drive has too.

From November 28 to December 2, sales professionals across the country will be blogging for blood.

Judy’s Book is the brain child of Andy Sack and his partner Chris DeVore.  Andy is a guy we backed at Flatiron Partners.  He founded Abuzz which was sold to the NY Times.  As Brad talks about in his post, Andy is a smart and scrappy entrepreneur.  Brad knows because he was an investor in Abuzz as well as another startup Andy did.

Judy’s Book is an interesting play. Most everyone who is doing local search is going about it with a yellow pages model.  While Judy’s Book intends to replace the Yellow Pages too, they are taking a very social networking/user generated content approach.

I like the service and posted a review this morning.

Many of the comments and criticisms that were leveled at Riffs this weekend apply to Judy’s Book as well.  It will be interesting to watch these services develop and see whether user generated content and social networking will be a better solution than search and microformats.

One thing is for sure, reviews, ratings, and tapping the wisdom of the crowds are alive and well on the web this year.