Please send me an email if you’d like to help me realize any and all of these resolutions.

Happy New Year and Best Wishes for 2006 to everyone! The next morning I went out for a bike ride.  And played the recent songs on fred’spodcast on my iPod.

At some point, Little Thoughts came on.  As the song built, I started to ride faster and faster.  By the end, I was up over 20mph and exhausted.  So I stopped and checked out my iPod.  So began my love affair with Bloc Party and this record, Silent Alarm.

The record starts out with the twang of a guitar, followed by the flutter of the base, and about 30 seconds in the drums kick in and you know right away that you are in for some hard driving rock and roll.

The Gang of Four influences in the vocals and the guitar are unmistakable.  That’s a good thing as far as I am concerned.

But these guys are not some Gang of Four clone band. They are the real deal.  The drums, bass, and guitar, and vocals all seem to be front and center as if there is nothing that can get lost in the mix.

The Gotham Gal and I went to see them play this record live this summer.  And they were even better live.

Happy New Year everyone.  Here’s looking to a great 2006.

I really like Steve Rubel’s predictions, including his Crash prediction which I won’t reblog because it doesn’t meet my definition of things I want to make happen.

But his post on "RSS inside" is spot on and it does fit my definition:

In 2006 feed reading will become even easier than it is now, especially if there is a groundswell of adoption around Windows Vista. It will bolted into all kinds of connected devices, from cell phones to Sling Boxes to point of purchase displays. In addition all kinds of new information will find its way into feeds, not just news and blogs.

Now that we are unified under one flag, RSS – as a term – will actually begin to fade. Sure, it will always be popular among us geeks. However, RSS will increasingly become, as Greg Reinacker at Newsgator believes, plumbing. We will talk about it the same way we from time to time lovingly espouse SMTP. Raj Bala also gave me two tips this year that ended up in the top 10.

M. Ward was his biggest contribution to my musical journey.  This guy blew me away the first time I heard him and he hasn’t stopped doing that ever since.

He may be known for his guitar playing, but its his voice that does it for me.  I can’t get enough of it. Neither can the rest of our family.

And his song writing is also wonderful.  This record, Transistor Radio, could have as easily been written by Woddie Guthrie.  It’s that good.

I’d single out some songs, but honestly this record is one of those that has to be listened to straight through. It’s a study in his childhood memories of listening to the radio.

"turn the volume and get a little of hi-fi".  Absolutely.  Any time Matt.

From John Battelle’s post on mobile search (not his 2006 predictions):

Watch mobile this year, I swear, some interesting things are happening. I saw something this week that blew my mind, but can’t write about it for a little while.

Mobile is a platform that the current web giants don’t control.  The carriers control it today, but are going to lose that control slowly and surely over the next several years.

This is a place where someone new can come in and shake things up.  Wifi is an important piece of the puzzle (as is wimax) but so are new software and services for mobile devices.

I agree with John, 2006 is going to be a very interesting year for mobile. Steve Rubel’s first prediction in a multi-post series is a good one:

Blog comments have perhaps more collective wisdom inside them than any other form of consumer generated content. However, as of today, there’s essentially no way to mine them. Who’s going to help us here? Will it be Google, Yahoo, Technorati or Ice Rocket? Or will some great new search engine come along and change the game. Tune in this time next year.

Steve is right, of course, but there is so much more to be done with comments than simply being able to search them.

We need a solution to comment spam, maybe captchas are it, but TypePad doesn’t support them yet. Most of the other blogging platforms seem to offer them by now.

And as I have said before, we need a way to elevate the best comments right up onto the front page.  I realize that most of my posts generate comments that are way better than my posts.  I want a simple one click button that posts the comment right onto the bottom of the post.

Bottom line – blogs are conversations.  We need to start treating the comments like the important content that they are instead of an afterthought. Our friend Cliff is always a source of new music ideas and this year was no different with two tips that turned into top 10 records.  The first one was Josh Rouse.  I have no idea why we’d never heard of Josh before.  His style of pop folk is right up our alley.

Cliff tipped us off at a barbeque in June and Josh was the biggest thing in our house all summer.  We must have listened to this record, Nashville, and another of his records, 1972, every day this summer.

We are still listening to them and we had Nashville on last night.

Josh captures settings in his songs like an artist. His song, Winter In The Hamptons, captures perfectly the feeling of hanging out at the beach in the cold months when the place is deserted.  And Saturday is such a wonderful love song.

We love Josh Rouse and we love this record. 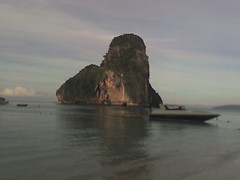 Hanging on the beach in Krabi Thailand with all 656 pages of Kavalier & Clay and Loudspeakers number nine podcast in my iPod.

Needless to say, postings are going to be light for a couple days.

Discuss on Twitter
View Discussions
#Blogging On The Road
Dec 27, 2005

I have been a fan of free wifi as a public utility since the early days of this blog.

"Wi-Fi is going to be ubiquitous. You’re going to see more municipal hot zones going from announcement to reality. We’ve seen a huge increase in shops offering free Internet access as a way to get people in their doors."

Free and ubiquitous wifi is important because it makes access available to anyone with a wifi enabled device, levels the playing field in a host of ways, and makes wifi based telephony a reality.

I can’t wait to see it happen.