Jessica pulled this one out during one of our Positively 10th Street podcasts and it’s been in heavy rotation ever since.

The Shout Out Louds are from Sweden and this record, Howl Howl Gaff Gaff, is simply fantastic.

It’s super high energy.  The songs are so catchy. It reminds me a bit of the Killers record from last year. If you want something to get you up and moving, this record is it.

We didn’t get this record until the late fall but even so it may be one of the most played record in our house this year.

This is the fourth post in a series I am doing called Predicting The Future.

Blogs have developed monetization systems like contextual advertising and affiliate links that have allowed the most popular bloggers to make a decent amount of money with them.  The top bloggers have not been forced to join the blog networks in order to turn their blog into a business.

Not so with podcasting, videoblogging, etc.  Today, if you want to make money with those efforts, you need to join a network like Podshow.  But that shouldn’t be.  Podcasting and videoblogging should have its own native advertising system.

Jason Calacanis points this out in his prediction number nine:

9. Google Adsense for Podcasts and/or Video will debut in Q2/Q3 of 2006–Yahoo and Microsoft will follow shortly after that.

If and when these companies, or an independent, does this, we’ll get the technology up on Positively 10th Street. This pick won’t be controversial as In Between Dreams is one of the best selling records of 2005.  Jack Johnson went mainstream with this record and that’s fine with me.  I love his mellow music.

I put this record on my top 10 list becuase there isn’t a bad song on it.  On top of that, there are a bunch of really great songs on it.  I love Banana Pancakes, Staple It Together, Crying Shame, If I Could, and Breakdown.

We got this record in the spring and it stayed in heavy rotation through the summer but we haven’t listened to it much lately.  I went back and listened to it a couple times recently as I was putting together this list and it took me back to summer nights with the sounds of the beach in background.  Great stuff.

This is the third post in a series I am doing called Predicting The Future.

Dave Winer has a bunch of predictions up on his WordPress blog.  I suspect they are all tongue in cheek but I can’t be sure.  The first one got my attention:

1. Apple will ship two generations of iPods. The
first new generation, released in April, will have a satellite receiver
built-in. The second will have a low-power FM transmitter built-in.

Since we all know that Apple will not open up the iPod without a sea change in their market position, I am interested in doing something in 2006 that will allow me and everyone else to own digital music player that we can plug a FM module, a Sirius module, an XM module, or an HD module into, and get "tivo like" store and replay functionality as well. This post is going to run on Christmas day.  Merry Christmas everyone.

One of the best gifts we recieved this year was an introduction to the music of Mike Doughty.  It came via a song on Paul and Janine’s Mass Hysteria podcast on June 30th.  Joanne and I heard the song (I Hear The Bells) and turned to each other and said, "who is this guy?".

We got the record, Haughty Melodic, then went to see him play live at The Stephen Talkhouse with Jackson and D, and then found out he grew up right down the street from us at West Point, a number of years behind us.

That sealed it for me. But everyone in the family digs Mike. Jessica and Emily love Madeline and Nine and love to sing along with it when it comes on.  And Joanne has had Mike in heavy rotation for the past six months.

The Amazon reviews say that is is not Mike’s best work. I tend to agree as I prefer Skittish and Rockity Roll, but Haughty Melodic is way more accessible and I think its the best intro to his amazing music. I think Mike is on the cusp of busting out and I can’t wait to watch it happen. I can’t remember a year in which Christmas and the first day of Chanukah landed on the same day.

In our family we celebrate both holidays so today is even that much more special.

Merry Christmas to all of our Christian friends.

And Happy Chanukah to all our Jewish friends. Here’s a picture of us lighting the menorah in our hotel in Chiang Mai, Thailand.

It’s a flat world for the year end holidays in our family!

This is the second post in a series I am doing called Predicting The Future.

I really like Conversion Rater’s Predictions for 2006 and number seven is near and dear to my heart:

I don’t think this is going to be done by a single company, more likely by a group of companies in an effort to compete with the current leaders, Google, Yahoo!, Microsoft, AOL, etc who are not interested in transparency.

I think we can build an open ad market that will be better for everyone than the walled gardens that exist today and I plan to work toward that end in 2006. 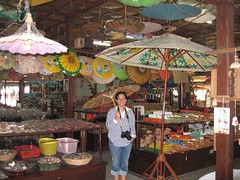 joanne at the umbrella factory
Originally uploaded by fredwilson.

Jessica said that she always sees “made in Thailand” on the back of stuff.

So we spent yesterday morning visiting various factories where this stuff is actually made.

We liked the umbrella factory the best and bought this one to bring home with us. The Gotham Gal hunts down new music with the same fervor that I do.

Early this fall she came up with The Magic Numbers.  What a find.  One of the reviews on Amazon calls this "the record of the year".  It’s not number one on my list, but I can see why someone would say that.

People compare their sound to Brian Wilson and there is some similarity.  This is just pure joyous pop music and the songs are fantastic.

This is their debut record.  I hope they can keep putting out music as simple and enjoyable as this in the future.

This is the first post in a series I am doing called Predicting The Future.

Ever since I posted my The Future of Media rant, I have been obsessed with the idea that the major media companies need to start putting their television and film assets online for free with an ad supported business model, like they do on broadcast television every day (but not on cable or DVD).

1. Someone, and I do not know who, will make a big pile of Big Media
video assets freely available on the web – and not via Google Video.
This will be a major studio, or television company, which will realize
that once you free content, content will come back to you in mashed up
and remixed glory that has – holy smokes! – real business models like
advertising and retail attached. The deal will be simple: anyone can
download, rip, and mix this video, but if you plan to make money from
it – even selling ads next to it – you have to cut a deal with the
mother ship. The company that does this will be heralded as either
visionary, lunatic, or both.

I want to do whatever I can do to make this happen so if you have a technology or business model that can help make this happen, or if you work for a major media company that is thinking this way, please email me and let’s talk.