My State of the Union

President Bush will tell us what he thinks of the state of the union tonight.

It’s always political speech, regardless of who gives it.

They are always long on vision and never really engage in soul searching as a true state of the union should.

I spend a lot of time thinking about the state of our union, and I mostly refrain from posting my thoughts as they always seem to annoy about half my readers.

But every so often, I can’t resist the temptation and tonight is one of those times.

I am unhappy with the state of our union.

On the foreign policy side, I see an activist government that is fighting a war on terrorism against an enemy we can’t see and don’t really understand.  We are fostering a civil war in Iraq that is catching our troops, our journalists, and many Iraqi citizens in its crossfire.  And I wonder how long we will sit in this crossfire before it is too painful to bear.  And I wonder where we draw the line on this interventionist policy.  Do we take the fight to Iran, to North Korea?  Do we have to go it basically alone?  Why won’t the rest of the democratic world fight this war on terrorism alongside of us if it is so critical to the stability of the world?  And why has our international reputation fallen so far in the past decade?

But as troubling as the foreign policy picture is, I am even more distressed by the domestic scene.  We have oil companies like Exxon reporting earnings at the rate of $40bn per year.  And yet we have no real alternative energy policy in this country.  We have federal budget deftcits of close to $500bn compared to a surplus at the beginning of the decade.  We have rising interest rates suporting a dollar that is terribly weakened by a bankrupt fiscal policy.

We have senior citizens scared and confused by a market driven drug benefit policy they don’t understand and don’t like.  We have religious beliefs governing our thinking on issues like stem cell research and the morning after pill.

We have a goverment that is proud of the fact that it spies on its citizens.  A government that takes great pleasure in raising the specter of 9/11 every time someone questions the wisdom of its policies.  And a party that controls every branch of government and is once again proof that absolute power corrupts.

But I also see a minority party that is so bereft of ideas that it has been relugated to the back bench where it simply throws tomatoes at the guys in charge but does nothing more. I see a Democratic party that is led by an old guard that has lost the war but can’t admit the defeat.

I see a Democratic party that remains built on age old foundations like labor and civl rights that are  cracking and buckling before our very eyes.

So President Bush can say all he wants tonight to make our country feel good about where it is and where it is going.  But it is not going to make me feel good.

I am tired of the Bushes and the Clintons, the Kennedys and the Delays, the Gores and the Cheneys.  I want them all gone.  I want new blood, new ideas, a new state of the union. Unfortunately I think I am in the minority on this.

I first posted on these two stocks (as opposed to the two companies which I have also been posting a lot about lately) right after Yahoo!’s stock declined in the aftermath of a disappointing Q4 earnings report.

Well now Google has also posted a disappointing Q4 earnings report and has seen its stock go down about 20%.  YHOO is also down about 20% since its Q4 report.

It feels to me like a correction based on a resetting of expectations more than anything else.  A friend asked me tonite if this is likely to have any impact on consumer internet deals in Silicon Valley.

I can’t imagine it would.  If you look at the numbers that Google and Yahoo! are putting up, they continue to be incredibly impressive.  Maybe not impressive enough to satisfy the needs of investors who are paying >90x earnings for GOOG, but still amazing by almost any other measure. 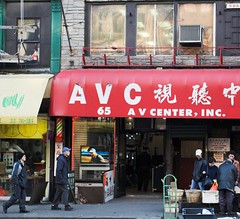 A reader sent me this.

Discuss on Twitter
View Discussions
#Photo of the Day
Jan 30, 2006

I have been an investor in a company called Return Path for almost six years.  Return Path is in a number of email related businesses, but one that they basically invented is the email delivery assurance business.  They work for commercial emailers and help them get permissioned email delivered to inboxes.  They work with the commercial senders on changing their practices so that their email will get a reputation as a "good mail" and will get through to the inboxes of the people who have requested the mail.

Well today AOL announced that it is taking a very different approach.
Last year AOL partnered with a competitor of Return Path’s called Goodmail
that thinks money is the answer to spam.  They believe that if you
force commercial mailers to pay to get into inboxes, the spammers will
be put out of business.  Nice theory, but in practice it smells like
bribing your way into inboxes.

Both approaches are EZ Pass for email.  But Return Path’s approach has always been to get the senders to send email the way consumers want it.  Permissioned, relevant, not too often, and stopped when the consumer says "no more".

AOL’s approach is to turn email delivery into a pay for access business.  Those who can afford to pay get through. So if you use AOL for mail, look forward to lots of high value email like mortgage offers, life insurance offers, etc.

But what if you are an AOL user and you get your weekly horoscope from a great
service that also has marketing messages in it?  If that
service doesn’t pay, your horoscope is going to go into the junk mail folder.  And you’ll wonder where it went.  What if you get your bank statements via email and your bank refuses to pay to get delivery?  Who will pay the late fees when you don’t get your statements?

Until today, Goodmail was only an option not a requirement because AOL also had something called "enhanced whitelist" which allowed commercial mailers with excellent reputations to get through the filters.  But I guess that wasn’t making them any money.  So today, AOL announced that they are "phasing out" their enhanced whitelist program and forcing commercial mailers to use Goodmail if they want their mail to get through to inboxes.  They spun that news as a good thing as this piece from ClickZ shows.

But what is really going on here is that AOL is saying that it doesn’t matter if you have a great reputation and have been whitelisted at AOL for years.  Now if you want to get commercial mail into their customers inboxes you must pay for delivery.

And so it’s a sad day for email.  The spammers have won.  They have turned email delivery into a business that can be bought and sold for the highest price.  And AOL is leading the way.  Of course.

My last.fm post generated some discussion in the blog world and Rags pointed me to David Porter who works at Live365.

David’s analysis is spot on, but the comment that popped out at me was the following:

I have always thought that the most vibrant web services use a combination of technology and people to produce the value.

But I have never thought specifically about the order in which the two need to be brought to bear on the issue at hand.

My initial reaction to David’s post was that technology has to come first and people have to come second. I think that’s the most scaleable and most natural way to architect a web service.  But maybe that’s not right.

The band of the week has been The Arctic Monkeys which I posted about last week.

We put their song Mardy Bum on last night’s podcast on Jessica’s suggestion.

And Josh said that his favorite song was the one about the "boys in bands" and the "ringtones".

Well that would be A Certain Romance and so I’ll make it my MP3 of the Week.

Listen to A Certain Romance

UPDATE:  After I posted this, I saw that the New York Times had a glowing piece on the Arctic Monkeys in today’s paper.  Wow.

There was some good debate in the comments section of my last.fm vs pandora post last week.

For me, its no contest.

About half have been songs from artists I’ve never heard of.  I skipped only one of them

The other half were songs I absolutely love.

It was a shorthanded crew tonite, Emily was dealing with homework and Jessica was sick with a stomache virus (but she did make a short appearance near the end).

We reviewed a couple restaurants, a play, and a movie and played five songs as usual.

Nothing new in there, but it’s a good historical review of the last five years and gives a good summary of where Yahoo! is headed.  This is my favorite quote:

Still, Mr. Semel contends that Yahoo’s ability to blend brand and
search advertising will set it apart as the Web continues its swift
evolution.

It strikes me that Yahoo! is farther ahead of Google in brand advertising than Google is ahead of Yahoo! in search.  The "turnkey" approach that Yahoo! offers advertisers seems like a very solid strategy.

Of course time will tell.

In the meantime, I have created my own head to head competition between the two in the Contextual Advertising section on the right sidebar of this blog.  I am now running both Yahoo Publisher Network and Google Adsense.

So far, its pretty clear that Google’s ads are more contextually relevant. But that’s not the only thing that matters.  Once I get a week or two under my belt, I’ll let you all know which one is making me more money. 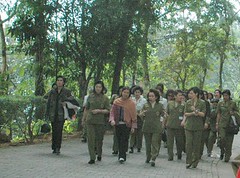 I grew up an army brat and my mom was an army wife. That’s a full time job and comes with a number of obligations.

When we were in Thailand we passed a group of army wives on a visit to the queen mother’s house. They were in uniform.

I was shocked to see that as I can’t imagine my mom and her friends wearing a uniform, but that’s the way they do it in Thailand.

Listen to 16 Military Wives by The Decemberists