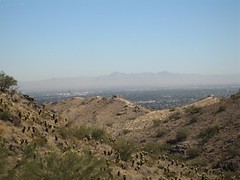 On Top Of South Mountain
Originally uploaded by fredwilson.

One of my friends and fellow VCs suggested we blow off lunch and go mountain biking instead.

What a tremendous idea.  Right behind the hotel where DEMO was held there is a state park called South Mountain Preserve.

But it was a blast and the views were stunning.  A great two hour diversion from a really great conference.