On January 13th, a cool song called Crazy showed up on my delicious tag fred’spodcast.

I listened to it for a while as it is a really great song, and then forgot about it.

Last night at a fundraiser, my friend Mark said to me, "have you heard the Gnarls Barkley song?"

I remembered it from delicious and said, "yeah, its pretty good".

Mark told me its going nuts on MySpace.  He would know because his company Wiredset has built the Infofilter service that monitors the web for hot entertainment and other products that are "going viral".  Here is the Infofilter MySpace chart for Gnarls Barkley. So, I decided to put the song back into rotation.  On the way home, I got the latest email blast from Bob Lefsetz.  And Bob’s in love with Crazy too.

I smell a hit in the making.  You can hear Crazy at MySpace obviously and also on the Gnarls Barkley website.

The highlight for sure is Gnarls Barkley’s cover of the Violent Femmes Gone Daddy Gone.  Awesome!

I am definitely going to get this record when it comes out.

UPDATE: Will Stephens (a reader) pointed me to this story which says that Crazy made it to #1 in the UK charts without ever being released in physical form.  Downloads alone made it #1.  That’s never happened before.  But it will again, and again, and again.

Who Are You? (continued)

Several months ago I did a survey of my readers courtesy of Federated Media, who handles the banner advertising on my blog.

I got somewhere around 800 completions (thank you!) and the results were fascinating to me.

But my readership changes and grows (or shrinks) over time and it seems that I should be constantly surveying my audience to keep track of the changes.

So I have added a link to the bottom of my posts in my feed and my blog that says "take my survey".

If you click on it, you’ll get a survey monkey powered form, four short pages in all, that will capture demographic info that has no personally identifiable information in it.

This is all powered by Feedburner and is part of the open feedflare and siteflare service offering.

If you use Feedburner and want to survey your audience, just set up feedflare and siteflare and turn on the "take my survey" link.  It’s that simple. 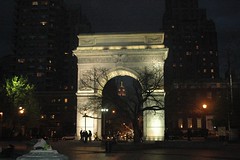 The Arch and The Empire State Building
Originally uploaded by fredwilson.

I have stopped searching the Internet for images for my blog posts.

I just go to Flickr and do a tag search.

The amount of high quality photographic images that is there is mind blowing to me and many others I talk to.

And when you post one of those photos, you automatically get attribution to the person who took it (see my Eels post from this morning for an example of what I am talking about).

This photo is one I shot last night.  I like it a lot and it shows that even though I am a hack when it comes to photography, even I can take some pretty cool photos now and then.

The community features on Flickr allow them to determine what’s most interesting and surface that to the top making searching even easier.

I know its been said many times that Flickr rocks, but I felt like saying it again this morning because it is so true.

The Eels are an acquired taste like scotch or cigars, both of which Mark Oliver Everett (aka E) consumed liberally during the show we saw them play at Town Hall in New York City last summer.

That show was recorded and is now available on CD and DVD . If you are a fan of the Eels, you must get this disc. And if you think you might be a fan, get the CD of the live show, it’s a great intro into this amazing band.

Writing a blog for my family, friends, colleagues, and the world at large

I started this blog for one reason – to blog.

I had no preconcieved notion of what that meant

First and foremost I write for my family and friends because they enjoy keeping up with me via the blog.  I talked to my friend Dana last week. We hadn’t talked in a while but she knew what I was up to.  When I told her about our spring vacation, she knew all about it.  She had seen the pictures on flickr.

But I also post for my colleagues in our firm, in our portfolio, and my friends who are vcs and entrepreneurs.

When I get an email from matt blumberg talking about how one of my posts impacted his thinking on his business or Iget an investment opportunity coming in from a colleague who reads my blog I know that I am doing something right.

And of course, I write for the world at large.  When I post about the raconteurs’ great new record, I want to get that word out to as large an audience as possible.  When I post on a ‘utopian view’ of the drug development business, as one reader called it, I am hoping that I can participate in a two way conversation with people al over the world

The beauty of this new emerging model of paticipatory, citizen powered media is that you can do all this at the same time on the same page. The conventional widsom is that media has to be focused and targeted at the source, the creation point

But it doesn’t anynore because it can be focused and targeted at the end, the consumption point.

And it is also getting mashed up and remixed along the wire and the ether as it goes from source to end.

So subscribe to my music feed if you just want my music posts.  Or find my mp3s of the week on the the hype machine.

Subscribe to my vc/tech only feed or read my posts on venture capital and tech at memeorandum or reddit or federated media.

If you are my mom or my brother, well then you’ll want to come to my blog and see what my avatar is wearing and saying today and watch the four fellas jam.  You might want to do that anyway even if I don’t know you and you live in shanghai.

That’s why this new medium so great.
—–
Sent from my mobile device Instead of posting a single mp3 from this record (which I did last week), I am linking to two live sessions they did at the BBC studios.

The first one is better if you’ve only got time for one listen.  Both are about 15-20 minutes long.

Josh’s band, the four fellas, are starting to get it together.

This clip (from the new and much improved vimeo) is from their last gig at the coffeehouse a couple weeks ago.  I was waiting for the new vimeo to post this.

They had it going until Ben’s mike stopped working. The clip is about a minute long.

Discuss on Twitter
View Discussions
#My Music#Photo of the Day
Apr 24, 2006

A Less Discussed Victim of the Digital Revolution

Watches are headed for horse whip territory according to Chartreuse and I think he’s right.

I personally hate watches and have never worn them, even before cell phones and PDAs.

I used to rely on my gut instinct aided by checking the time every time I saw a clock anywhere.

And rarely was late.

Now I rely on my phone for the time which works great and I don’t even have to adjust it when I fly or daylight savings time comes and goes.

The last one we did was on February 12th, over two months ago.

So I took it upon myself to get the podcast back on track.

Last night I was driving Emily and her friend back and forth to a dance party and was listening to a bunch of songs from new bands from the UK.

So I decided to put together a quick podcast featuring some of these bands and some of those songs.

It’s five songs, very little talk – just calling out the song titles and band names and not much more.  It’s about 20 minutes in total. 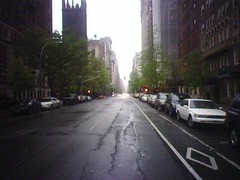 I took this with my sidekick on the way to get bagels this morning.

This weekend has been a rainout in NYC.