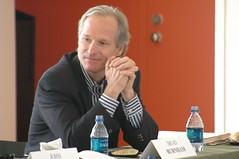 The transcript to our recent Union Square Sessions event is now up on the web on our wiki (at the very bottom of the page) or here is a direct link to the download the transcript.

Brad has a nice post summarizing the conversation with some good quotes he pulled from the transcript on the Union Square Ventures weblog.

A good third of the conference is outside crowded around a TV watching this great match. It looked like Argentina was going to win and then Germany scored on a brilliant header late in the match. These guys are Germany fans celebrating the goal. I had to leave to catch a flight home before the shootout. I see that Germany won 4-2 in the shootout. I hate to see such a hard fought match like that one come down to a shootout but they had to end it. The players were running out of gas.

Discuss on Twitter
View Discussions
#Photo of the Day
Jun 30, 2006 I’ve been listening to Wolfmother lately since my friend Michael turned me on to them. Their debut record is an unabashed love affair with 70s hard rock from the likes of Black Sabbath, Led Zeppelin, and Deep Purple. And it’s really good.

Their first record has plenty of Jack White’s signature guitar and wailing vocals. But it’s raw and full of the energy that debut records often have. And it has excellent covers of the Stones’ Stop Breaking Down and Dylan’s One More Cup of Coffee, and some old blues numbers including one by Robert Johnson.

But my favorite track for sure on this record is Astro:

Jack White cracks me up. If he cracks you up too, I suggest you get the debut record and put it on loud.

Adam Lashinsky is running a good panel on the business of carbon reduction.

I love the idea of being carbon neutral. I am going to figure out how to make our family carbon neutral, probably initially by writing a check and over time by changing the way we live.

Ads on this blog

Seth Godin (sethgodin.typepad.com) wrote a post yesterday linking to this blog and pointing out that I run ads on it.

He observed that you can learn a lot about how online advertising works by running ads on blogs.

He’s right and that is one of the reasons I do it.

But its not the only reason and not the most important reason.

I don’t like leaving money on the table. This blog does around 2 million page views per year on the web and another million plus views in my feed.

Those page views are worth real money and while I don’t need it, someone does.

And so I run the ad networks that can gnerate the highest effective cpms for this blog. That is FM and FeedBurner first and Google and Yahoo second.

That’s real money that will get a tribeswoman in africa a cell phone or a underpriveledged child a scholarship.

So that’s why I run ads on this blog. I hope you agree that its a good cause and please click on the ads and buy from the sponsors.

‘The Internet is recording almost everything you do on it.The opportunity for rich behavioral driven services is enormous.’

A Conversation About "Climate Change"

This post is about a conversation my friend Steve and I had on "climate change" that I mentioned in my post on John Doerr’s comments at Brainstorm yesterday.

My friend Steve sent me a WSJ editorial from Richard Lindzen, professor of Atmospheric Science at MIT saying that "there is no scientific consensus on global warming".

I read it and put it right next to all the counter arguments on climate change I’ve heard lately. And then sent I Steve an email saying "and what if the situation is irreparable by the time we reach consensus?"

Steve sent me back this reply which I am publishing in full with his approval.

there is no such thing as irreparable. the earth and the climate change  constantly. "greenland" is so named because it was green when it was explored.  the vikings had to abandon their settlements there many decades later when the  glaciers advanced and covered greenland. the ocean levels were radically  different when people walked across the bering straits. etc. we can’t freeze  time. and there never was a garden of eden… so we can’t go back  there.

so — if there is some fundamental changes in our mother earth coming (even if  caused by CO2) well, c’est la vie. manhattan didnt exist in nature, we created  it. if we have to adapt to new climate conditions, we will. no one (no one) is  saying the earth will be uninhabitable. just that it will be different.  remember, we deal regularly — regularly — with climate disasters now —  katrina, the pacific tsunami, mount st helens, etc. there is simply no way to  create some non-turbulent, none-changing, softer or mellower eco-system.  nature is fucking brutal.  period.

and therein lies my basic problem with so-called "moral crusaders" like al  gore. they obviously have altruistic motives, but they obviously are also  massaging their own egos (hey everybody look! i’m here to save the human  race!). and because of that, they can’t review the data or the scenarios or  even the plain everyday reality clearly and calmly: they can’t save the human  race if it doesnt need saving. and it doesn’t. which doesnt mean we shouldnt  have a meaningful debate about the possibility of global warming and make  plans accoridngly. we should. but we should approach the problem not as a  "save THE environment" issue but as a "save OUR environment" issue. no one  wants to return manhattan to a pre-human or pre-european-settlement state. but  a strict "environmentalist" approach would want to do just that. luckily,  saner and calmer heads prevail, and we instead say, hey, we love manhattan and  we’re gonna keep it, but we want it to be a balanced sustainable environment  for human beings, and maybe a few other species too (say, elm trees, a few  birds and domesticated pets) and we focus on that as a goal. not on worrying  that urban development is "bad for the environment". which of course it is,  duh. it literally destroys "nature". but we say, thats OK, because we are  focused on OUR environment, not THE environment. ditto the big cities of the  southwest. hell, there’s no natural water supply there. none. is anyone  suggesting we dismantle the colorado river aqueducts? and if not, why not? why  is the "environmentalist" and "moral crusade" so selective in their scorn?  because they are self-righteous, not righteous, and they want everybody else  to change, not themselves. (al gore flies around on private jets, vacations in  humungous homes, owns multiple homes, sends his kids to private schools, etc.)  physician, heal thyself. then maybe just maybe you can diagnose me, and the  human  race

then I said, "we didn’t make a global policy decision to start burning carbon  fuels, we just did  it. so why can’t we just decide to stop burning them?" and Steve replied:

on the contrary, we definitely did make such a policy. the creation of the  fossil fuel business and economy was very specifically the direct result of  various governments explicit open policies, dating back centuries. after the  chimney was invented, buring fossil fuels basically became the ticket to  modern life and rising standards of living. later, in the industrial  revolution, after the steam engine was proved, the brits essentially mandated  the radical expansion of the coal industry through various grants and tax laws  and initiaves, etc. the USA Interstate Highway Act most certainly was a  government policy advocating burning fossil fuels. ditto the goverment  creation of Airbus. all of us share responsibility for these decisions and we  shouldnt pretend otherwise. nor should we be ashamed: i for one think  "westernization" and "globalization" are great things for the human race, and  have been since Themistocles thankfully smashed the Persian fleet at Salamis.  yes, its got downsides and scary risks and nasty side effects, but it also  promotes human rights, democracy, literacy, better health and longer life  spans, equal rights on racial ethno gender matters, less hunger and  deprivation, etc. fossil fuels have played a HUGE DECISIVE POSITIVE role in  that. if its time to move on from fossil fuel, so be it, lets go. we did the  erie canal, the intercontinetal railroad, TVA, the marshall plan, the  manhattan project, D-Day, apollo missions. we can work our way into the next  energy era too. let’s go! but not by flagellation and finger pointing and  "moral crusades,"  please?

Then I said, "we should stop burning fossil fuels as quickly as  possible. i wouldn’t wait for scientitsts to come to an agreement.  because it will  never  happen."

here i disagree wildly. scientists come to agreement all the time, when  there’s data thats well, scientific (meaning experiements that can be  repeated.) there is no scientific debate on whether AIDS exists or is a plague  that needs massive resources. there is no debate that the earth circles the  sun, etc., and scientists and governments from many nations routinely   collaborate on scientific exploration of space, e.g. the current mars  missions. there is clear consensus on cartography, ergo things like GPS works,  regardless of whose satellite is being pinged.  etc…

arguably on the first "earth Day" in 1970, the 1960s "tune in turn on drop  out" and "dont trust anyone over 30" generation turned environmentalism from a  critically important mission into a "moral crusade" and that is just plain  replusive to me and we have been suffering the consequences ever since, the  same way it is repulsive to me that fundamentalist religious wackos think  "marriage" is a moral crusade and not an essential civil rights issue.  likeiwse i am in favor of the war in Iraq for all sorts of historical and  political and tactical reasons, but i cringe and am repulsed when i hear it  called a "moral crusade" by bush or anyone. "moral crusades" are for religious  zealots and lunatics, not rational modern humans and scientists. and as i  said, look at nuclear energy in this country. or better, look at the  management of yellowstone park. the so-called "environmentalists" have turned  a good cause into a major debacle, and arguable have harmed the environment as  a result. not sure if you love or hate michael crichton, but you can get a  sense of the yellowstone debacle  here

To me this whole conversation points out that this debate about "climate change" is a political debate filled with political baggage and a fight about words, not actions. And that is troubling to me because I think Steve and I agree about what has to be done, but not how to talk about it.

If you are a foodie and live in or visit NYC regularly, you have to check this place out.

Tell them the Gotham Gal sent you.