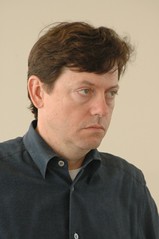 Why do I look so confused in this photo?

Because it was taken during our second Union Square Sessions event on Thursday along with a ton of other photos which are now up on Flickr.

The event was about public policy and its impact on innovation. We covered net neutrality, the broadcast flag, the Digital Millenium Copywright Act, patents, creative commons, and a host of other topics.

I found the policy dicussion a bit daunting to process. The arguments on both sides of the issues are complex.

Add to that the fact that the entrepreneurs and VCs in the room took a particularly "doesn’t matter" point of view flush with optimism that they can innovate or invest around bad public policy.

Nevertheless, I am glad we hosted the event which is described in more detail on the Union Square Ventures weblog.

We’ll be putting up the transcript to the entire six hour session sometime next week so those of you with an interest in this discussion can participate.