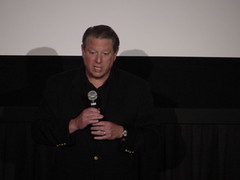 The Gotham Gal and I saw Al Gore’s movie last night. It was pretty much what I expected, part Al’s slide show which I’ve seen parts of over the years, part campaign film, and part an impassioned plea to change.

I would recommend everyone who hasn’t seen the slide show go see this movie. It’s an excellent packaging of the facts and science surrounding the climate change situation.

But unfortunately the film exposes two of Al’s greatest problems and why so many people don’t want to listen to him. First, he wraps the whole story in a "save the world" mantra that isn’t accurate. Clearly the earth is not at risk, but life as we know it is. I wish Al would make that point the right way.

Second, Al’s ego is wrapped up in this. He is way to melodramatic about the whole thing. I would prefer cold hard facts without all the preachy stuff. It does him such a disservice.

The bottom line for me is that we had better heed his and other’s warnings. This is real and its not going away.

I’d love to see someone take this 100 minute movie and edit it down to 30 to 40 minutes. A mashdown. It would be an excellent film for all of our schools to show our kids.