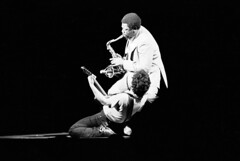 The Boss & The Big Man – 1978
Originally uploaded by KBlood.

Bob Lefsetz had this to say about Bruce Springsteen in his Less Than Sold Out post which in its entirety made for some very entertaining reading:

Let
me put this in perspective.  Four days later, at the exact same venue,
the GIN BLOSSOMS outsold Bruce.  Sure, tickets were a fraction of the
price, but what should Bruce be charging anyway, isn’t he a man of the
people, doesn’t he have ENOUGH money?

Then, a night after the Gin Blossoms, PAT BENATAR outsold the Boss.

Hate to tell you this, but Bruce Springsteen is a B-level artist.

Oh,
he’s TALENTED, has made some great records, but he’s no Bob Dylan.
And, he hasn’t put out a good record since "The Streets Of
Philadelphia".

And now, even the fans have had enough.  Oh,
they came back to see the E Street Band, but that’s all they’re
interested in, nostalgia, and the grosses for those original band shows
were declining too.

Sure, this is a hefty number.  I just want to state that the ink the Boss gets IS NOT COMMENSURATE with the size of his fanbase.

People under the age of twenty five, THIRTY, truly don’t give a shit.

Oh,
I love that he takes a stand against Bush.  I loved seeing him do
"Jungleland" at the Bottom Line.  I have such fond memories of "Candy’s
Room".  But after he sold out and made a commercial album with "Born In
The U.S.A." I had my suspicions.  And he’s never done much to dissuade
me that he’s lost his way.

Now was the time for originals, not covers.

People believe in Neil Young.  Somehow, fans adore Bruce, but they just don’t believe in him the same way anymore.

Can’t
we see the alienated fuck again?  The loner with something to prove as
opposed to the cheerleader for baby boomer contentment?

And to Bob’s credit he published a bunch of email he got on the Less Than Sold Out post, including this one from Harlan Frey:

And record wise…’The Rising’ was one of THE BEST Bruce records to date.  Your taste is FUCKED if you can’t appreciate this record.  Might I add that  Bruce is  by far one of the most riveting, compelling LIVE entertainers in  the biz. Please take that west coast head of yours out of your ass.

I didn’t grow up a Bruce fanatic like so many of my generation, but I love The Boss; for Rosita, for Darkness, for Born to Run, for Nebraska, for The Rising when we needed it, and for his love of American music and performing. He is not anywhere near a “B level artist”.

I was driving down El Camino Real tuesday night listening to KFOG and Manfred Mann’s cover of Blinded By The Lights came on. Wow. What a great song that is. And behind all that psychedelia, you hear Bruce’s words and they are in his voice. That’s what makes Bruce every bit as much of a legend in my mind at Dylan, Woodie Guthrie, and the other greats of American music.

And it may be true that people under the age of 25, 30 “don’t give a shit” about The Boss, but I was witness to one ten year old boy, my son Josh, who was up on his toes with his hands over his head clapping to the beat for two hours at the Seeger Sessions show last month.

And I will remember for a long long time his look up at my eyes and his saying, “this is a great show Dad”.

That’s because Bruce is one of the greatest performers ever. He brings it every night and never lets the crowd down. I don’t want “the loner with something to prove” again Bob. I just want The Boss in whatever form he comes in. That’s plenty good for me.