Transparency, Markets, and the Internet 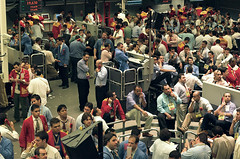 One of the benefits of looking at the Internet from an office in Manhattan versus Sand Hill Road, Route 128, Beijing, or somewhere else is that the Wall Street mentality is pervasive in Manhattan. And so my lens is colored by the ways of Wall Street. I am not suggesting that is good or bad, just that it is.

And so one of the things that I have been fascinated by is the power of the Internet to create transparency and facilitate the creation of more efficient markets.

When I first met Jim Cramer blogging like a mad man from his trading desk, putting short bursts of wall street rumors and facts (not much a difference between the two) out into the ether, I was stunned. Jim was basically saying that he was going to share all that he knew, all that he was hearing, and all that he was doing with the world at large. We invested in Jim’s vision but I believe we made a big mistake charging a subscription for that blog which was and still is called TheStreet.com. What we should have done was make it free and encourage every other person crazy enough to do the same thing to join Jim and blog the hell out of Wall Street. Create a Weblogs Inc for Wall Street. In 1997.  would a could a should a

In 1999, I came across Gian Fulgoni and Magid Abraham who wanted to create a panel of Internet users large enough to devine what the entire Internet user base was doing. Not just where they were going, but what they were doing, what they were spending, etc. That was the genesis of Comscore which is now the leading Internet measurement firm. A year or two after they started Comscore, they were able to predict the quarterly revenues of Amazon within a tiny margin of error. Again I was stunned. Talk about transparency.

Around the same time that Comscore pulled the Amazon numbers out of their hat, I sat down and had lunch with Seth Goldstein who had been an entrepreneur in residence and then a principal at Flatiron Partners and was looking to start a new company. He wanted to do something in the area of hedge funds which he saw were becoming a huge force on Wall Street.

I suggested he think about taking data from companies like Comscore and others and use them to create transparency for wall street investors. He liked the idea and took it and ran with it. He and his partner Tony Berkman created Majestic Research which uses data culled directly from the Internet and provided by third party firms like Comscore and others to deliver primary actionable data to Wall Street. Majestic took off and is now a major provider of third party research to the hedge fund community.

Also in 1999, I invested in and joined the board of Alacra. They have built a huge data warehouse on the web and filled it with pretty much every premium database of interest to wall street. And just last month, they released company specific RSS feeds that alerts you when much of this premium information is updated.

In 2003, as Brad and I were getting ready to start Union Square Ventures, I got a call from Isaak Karaev who had founded and built Multex into one of the leading information providers on Wall Street. Isaak had sold Multex to Reuters and was starting a new firm. He was looking at blogging, RSS, web services, tagging, and a host of other “web 2.0” developments (this was 2003, Isaak always was ahead of the curve) and saw that they could be combined into a web service that would allow wall street professionals to see more, understand more, and share those insights quickly with their co-workers and trading partners. And that was the genesis of Instant Information which is now marketing their service to the buy side and sell side on Wall Street.

Early last year, I met Roger Ehrenberg who was leaving the world of proprietary trading after almost 20 years on wall street and looking to do something in the startup/venture world. Roger teamed up with Jeff Stewart to form Monitor 110, which is crawling the deep web to surface actionable trading ideas before they surface through traditional channels. And Roger has recently started a blog called Information Arbitrage which I have just added to my blogroll.

So that’s a quick trip through my journey toward the land of transparency in financial markets. The days of schmoozing the CFO so you can get the call before the other analysts is over. Put to its grave by the cleanup of wall street in the aftermath of the last bubble. So you have to get the facts some other way. It’s good that we have this thing called the Internet that is ideally suited to out every secret, fast forward every rumor, and route it to the very people who need that information to trade on it.

Schmoozing is out. Crawling is in. MBAs with a spreadsheet are a dime a dozen. But the kid who knows how to mashup 1000 rss feeds, tag them on the fly, and cross index them with the crawler he hacked the other night at three in the morning is in high demand.

And if that kid wants to give up his fat hedge fund paycheck and build a company around those skills, I am all ears.

We are currently going through the planning stages for our next Union Square Sessions event. Transparency, Markets, and the Internet is one of the topics under consideration. If you have an interest in this area or know of people who are leading thinkers in this arena, please let me know in the comments or via email.