What Is Online Identity? 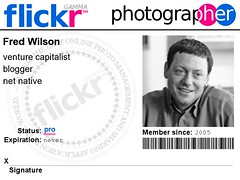 My creation
Originally uploaded by fredwilson.

Identity is a loaded word.

People think of security issues, identity theft, big brother stuff. And so it’s been a tricky place to build a business on the Internet.

On saturday, we did a podcast with my brother and his girfriend. Near the end, 29.25 into the podcast in case you want to listen, we had a very interesting conversation about social networks. It seems like anyone over the age of 15 and under the age of 25 has at least one place on the web where they maintain on online presence with a picture of them and a bunch of information about who they are. If you look at our generation, 40 to 50 year olds, its a vastly different picture, with maybe one out of five in our age group (at best) maintaining an active online presence.

But if you are a net native, you’ve surely got a place on the Internet where someone can go to learn about you. For me, it is this blog, although you could also go to my MySpace page, my LinkedIn page, my Flickr page, or the Union Square Ventures weblog.

If you want to know about anyone in the MySpace generation, all you have to do is check out their MySpace page or Facebook page and you’ll know as much as you need to know. You’ll know what they look like, where they are from, who their friends are, what they like, etc.

So it makes a lot of sense to me that everyone should have a single URL that describes who they are, maintained by them, not some government organization. The URL avc.blogs.com will tell you a lot about me, maybe as much or more than my social security number. Together, they certainly form a very full picture. Yet no bank has ever asked for my URL when they are setting up an account. They should.

When we hire someone or invest in someone, we want to check them out. If they have a blog or some other form of online identity, it makes it a lot easier for us to figure the person out. Would you rather have an URL or a social security number and mailing address?  For anyone under the age of 25, I’ll take the URL for sure.

I’ve already used this framework to configure my blog URL to be a password that I can use to sign onto a number of web services. I’d like to be able to use it everywhere. It is me and I am it. So it makes sense that I should be able to use it all over the Internet to authenticate who I am.