For the past three years I have been blogging actively but not using a feedreader actively. Sure I’ve used plenty of feedreaders. I’ve basically tried them all. I’ve been regularly subscribing to feeds in newsgator online and bloglines, largely to database blogs I like. I keep a top ten list of blogs in MyYahoo. And I get all my podcasts via feeds in iTunes. And I subscribe to delicious feeds in MyYahoo (text) and iTunes (audio and video).

But as I’ve blogged numerous times, I have never really used a feedreader the way most people do. I prefer to read the posts directly on the blog. I want to see the youtube videos that don’t come through on most feedreaders, the sidebar bling, etc.

But I’ve decided that I really need to be more organized about my blogreading habits and with the arrival of a new laptop (my macbook pro), and the prodding of Brad Feld, Charlie O’Donnell, and Al Warms, I’ve taken the plunge. The comment that convinced me was from Al, who said he loves to read blogs offline on planes in his newsreader. That’s compelling to me.

I am using NetNewsWire and I’ve imported the opml files of all the various readers I’ve used over the years. Then I pruned the list of blogs down to the 87 (no magic number there, just what I ended up with) feeds. I’ve organized them into seven categories:

And I’ve taken the final, but important, step of using NetNewsWire’s synching feature (with Newsgator Online) to publish my real blogroll. The list of blogs you see on the lower right sidebar is the exact list in my NetNewsWire reader.

When I add a blog to NetNewsWire, it will end up on the blogroll. I’d really like to organize the blogs/feeds by my seven categories, but I don’t know how to do that in Newsgator yet. When/if I figure that out, you’ll see the categories appear on my blogroll.

I don’t intend to stop reading blogs the way I’ve been reading them for the past three years (mostly by following links), but I do plan to check in on all 87 (or more) blogs in my reader at least once a week. I think that’s how most people do it and you can now call me converted.

Business 2.0 (they were 2.0 before everything became 2.0) has a great piece on the moves the New York Times is making to take advantage of digital media and web 2.0. It was penned by my friend John Heilemann who is doing a damn good job profiling some of the most interesting characters in the web world. In this piece he talks to Martin Nisenholtz about how far the Times has come in a fairly short period of time and the moves they are making to remain at the top of the online news space.

I am particularly interested in this story because my firm Flatiron Partners was an investor in the New York Times Digital and my partner Jerry Colonna was on Martin’s board for several years before we sold our interest back to The New York Times Company. Since starting Union Square Ventures, we have partnered with The New York Times on our investment in Indeed and we are always looking for other opportunities to work with them.

I am particularly interested in seeing My Times, which is apparently in private beta (how come I never got an invite?). This is how John describes My Times (apparently he did get an invite):

the free service lets you customize your own news homepage, adding
feeds from third-party blogs and news sources in addition to slicing
and dicing Times content. But what sets it apart from other user-customized online news sites is that it includes access to pages maintained by Times
journalists – about two dozen of them at the moment, including such
A-listers as Frank Rich, John Markoff, and David Carr-that contain
their own bookmarks and feeds.

Now that’s a cool idea. I’d subscribe to a feed of Frank Rich, John Markoff, and David Carr’s bookmarks for sure.

But the most interesting thing in the story is the gap between the new stuff that the Times is developing and the reading habits of their user base. Here are some quotes from the story that I found particularly interesting on that subject:

On the Most Popular page, while the Most E-Mailed feature is, as he
puts it, "the big kahuna, a significant driver of interest," Most
Blogged and Most Searched are catching on more slowly. Tagging hasn’t
caught on at all.

RSS newsfeeds, which the Times adopted early, are still "a niche,"
Nisenholtz says. (In June, RSS feeds generated 12.2 million pageviews
for the site out of a U.S. total of nearly 295 million.) "RSS is still
very techie," he says. "Most people outside the business are totally
unaware of it."

"We touch 25 or 26 million people a month," he says, "and a very
minimal number of them are technologically savvy…. Our median age
online is 44 or 45 years old. So we have to find ways to bring people
into the loop who don’t know what a tag cloud is."

Well they’ve got one reader who knows what a tag cloud is right here and I am eager to try out some of this new stuff. I just hope they don’t fall into the temptation to put it into Times Select, the one part of the Times strategy that makes no sense to me. That Dylan/Johnny Cash video got me in a Dylan mood today and I went for the vinyl and came up with John Wesley Harding, Dylan’s first of three "country records".

The second side of this record is not as strong as the first, but the last song on the record is the best, I’ll Be Your Baby Tonight. And of course, the harmonica solo at the end of the song is fantastic. If you like harmonica, get this record. 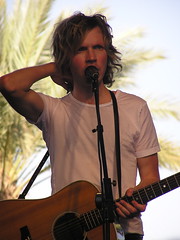 I read this interview with Beck today and just had to post about it. Beck is trying to figure out the best way to "give the music legs" in the digital age.

I’ve posted alot about digital music over the years and there are plenty of readers who feel that the digital era has devalued music, made it harder for artists to get paid, etc, etc. And certainly that has been true, but I think that’s largely because artists and their managers and labels have not yet figured out how to take advantage of the digital medium.

Beck is trying lots of interesting things including releasing a video version of the record on YouTube (read the interview for more details of that).

There are so many dimensions to what a record can be these days. Artists can and should approach making an album as an opportunity to do a series of releases – one that’s visual, one that has alternate versions, and one that’s something the listener can participate in or arrange and change. It’s time for the album to embrace the technology.

Of course all this doesn’t matter a damn if the music insn’t any good. Hopefully Beck’s new record will be great and all the cool things he’s doing to embrace the digital medium will make it even better. 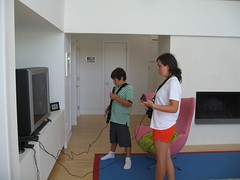 We got our second Guitar Hero guitar.

It’s taken the competition to another level.

I hear from the people who developed the game that Guitar Hero 2, coming in November, is going to take multiplayer play to another level.

Discuss on Twitter
View Discussions
#Photo of the Day
Aug 24, 2006

Peter Rip, an early stage VC at Leapfrog Ventures, is preparing a series of posts on VC 2.0. How do I know that? Because he has posted a preamble outlining the characteristics of VC 1.0.

Here’s the basic thesis behind Peter’s coming set of posts:

The thesis of these essays is that the venture cycle has fundamentally
changed for Information Technology and that formulae that worked over
the past 20-30 years no longer broadly apply.

I actually think that’s pretty well understood these days in the VC business but it will be interesting to see what Peter thinks the new formula is or even if there is one.

Song of the Day - Have A Little Faith In Me

This is one of the greatest songs ever written. It never fails to get me choked up. I heard it on my friend Fred’s 20th Century Fire Sale double CD collection (if you had to grab two CDs of music to take into the 20th Century, what would you choose?). Well Fred I totally agree on this song.

Have A Little Faith In Me – John Hiatt

Like all great songs, this one’s been covered by quite a few artists over the years. I am particularly fond of this cover by Delbert McClinton.

Have A Little Faith In Me – Delbert McClinton

Adding Community To The Comments

Some of you might have noticed icons/faces next to some of the comments on this blog yesterday.

That’s because the people at MyBlogLog turned on "comment/profile integration" on my blog yesterday morning. The coolest thing about this is that I didn’t have to do a thing. They just flipped a switch somewhere and my comments are now integrated with my community.

If you have the MyBlogLog community on your blog, social network, and/or web site or service, then you can get comment/profile integration too. It’s working in TypePad as of yesterday and it will be working in WordPress and Moveable Type sometime this week. All you have to do to join the private beta is send an email to Eric (eric at mybloglog.com).

I am really excited about this for a bunch of reasons. First and foremost, I recognize the names of frequent commenters, but now I’ll have a face or avatar or icon to add to the mix. That makes my life a lot easier and hopefully makes it better for the people who read and contribute comments to my blog. Blogger comments have worked this way for a long time and now we have a cross platform solution that will support all the major content management solutions over time.

If you think someone has written a particularly interesting comment (or a particularly annoying one), you can click on their icon and be taken to their MyBlogLog profile. You can see where they blog, what other MyBlogLog communities they belong to, etc.

But mostly I am excited about the possibilities of where this can go. Ever since I put MyBlogLog community on my blog, I’ve been thinking about the possibilities that result from combining community and social media/blogging. To date MyBlogLog has mostly been about promise because there hasn’t been much to do inside the community. Now with comment integration, we are seeing the first move. I suspect they’ve got a bunch more up their sleeves.

So now when you are reading the comments and you see a little box that says "Add Photo" next you your name, click on that box and join my community. I’ll appreciate it and I suspect the rest of my readers will too.

I heard the other day that a prominent venture capitalist had threatened an entrepreneur who wouldn’t do what he wanted him to do with these words "I’ll ruin your reputation".

That really pisses me off.

But upon reflection, I realized that nobody can ruin anyone else’s reputation.

You can only ruin your own reputation.

And a really good way to do that in the venture business is by threatening entrepreneurs like you are Tony Soprano.