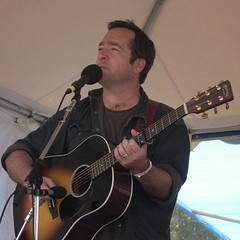 My brother and his wife invited me to go see Richard Shindell play a free concert in Madison Square Park tonight.

I am embarassed to say that I’ve never heard of him.  He’s a great folk singer.  He tells stories in his songs and talks about them before he sings them. I love that.

It was a fantastic night, cool, dry, not a cloud in the sky. The park was fantastic and it was a great feeling to lie down, look up at the Met Life clock tower and let folk music waft over me.

I bought his live record Courier at the show. If you like folk music, you might want to do the same.

Here’s a song for those of you who have not heard his wonderful singing.

The Next Best Western – Richard Shindell

Note: This photo was not taken tonight. I left my camera at home. I ganked this one from Flickr. Thanks Amanda, its a very nice shot.