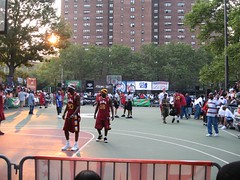 Last night I went up to Rucker Park with some buddies to see the playoffs of the EBC league.

Rucker Park is in Harlem, at 155th street between Frederick Douglas Blvd and the harlem river drive , the site of the former Polo Grounds where Bobby Thomson hit the shot heard round the world in 1951. It was cool to be at a place with so much history. But the Polo Grounds is long gone, replaced with a basketball court with some real sports history of its own.

Rucker Park is known for being the home to the best street basketball in the world. I get to see a lot of street basketball at the West 4th Street cages near my home in the village, so I wanted to see what the big deal was about Rucker. 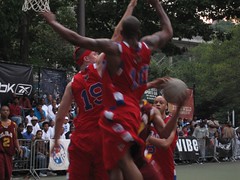 The big deal is the players, the crowd, and the announcers. You get bigtime college and a few pro players up at Rucker. Last night we saw JR Smith dominate his game. He put on quite a show for the crowd who included Fat Joe, Joakim Noah (whose team had been knocked out last week), and Macy Gray.

I sat next to Fat Joe for both games and was entertained by his play by play banter and the occasional ribbing of the coaches.

But the best part is the announcers, who do the play by play rap style loaded with humor (some of it inside humor), who are on the court with their microphones right next to the refs. They are so much more entertaining than the announcers who do college and pro ball. 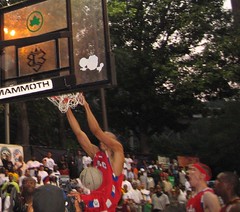 It’s a really fun time and easy to get to. You can drive straight up the west side highway or take the D train which has a stop right at Rucker Park at 155th and Frederick Douglas.

Next week the cities play each other and everyone is hoping for a final between LA and NYC. If that happens, it will be next wednesday.