TV on the Radio 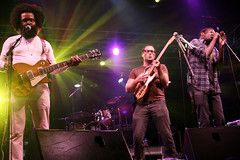 TV on the Radio
Originally uploaded by dreadfuldan.

I first heard this band from Brookyn on The Hype Machine a month ago. The song was Wolf Like Me and I was immediately struck by the pounding drum beats and the distorted guitar that weaves throughout the song. I tagged the song in delicious and went back again and again.

Then I started listening to their other songs and quickly found great tunes like Staring At The Sun and Ambulance (see YouTube video below).

Then I went to YouTube and watched their live performances at Cochella. I want to see these guys live. Apparently I missed the opportunity at the end of June at Celebrate Brooklyn. It looks like they put on an intense show.

This clip is Ambulance live at Cochella, it’s about 90 seconds long.

Last week their new record, Return To Cookie Mountain, came out in the UK. I bought it at Amazon and have been listening a bunch. I think Wolf Like Me (the song that got me hooked) is the best song on the record, but there are a number of other good tracks on it as well like Province, Let The Devil In, and Blues From Down Here.

It’s hard to describe TV On The Radio’s music. The best I can come up with is a harder darker Arcade Fire. They use a lot of cool instruments and I particularly like the great horn sounds throughout their music. But the great thing about mp3 blogging is that you can listen to the songs yourself and make up your own mind.