I love YouTube. It is the single best thing that has happened to the Net in the past several years. Nobody is going to convince me otherwise, no matter how hard they try. Calacanis won’t. Cuban won’t. Doug Morris won’t.

It’s the experience. The tools. The player. The comments. The community. That is the essence of YouTube. These guys invented the embeddable flash player. The single best move in the online video game to date. I love them and the service they’ve built and the community that exists there.

Bob Lefsetz captures all of that in this wonderful post where he takes it to Mark Cuban. And he uses this amazing YouTube video of John Lennon singing Ticket To Ride to make his point:

It’s not like this footage, and that of other performers all over
YouTube, was lost, it’s not like the owners didn’t know they had it.
They were just too lazy, or too preoccupied, to exploit it.  THAT’S
what YouTube has done, shown there’s a MARKET!

UPDATE: Saul Hansell has a story in today’s NY Times about YouTube where he covers some of these same issues and has a number of good quotes from Chad Hurley, Founder and CEO of YouTube. 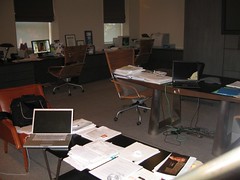 The other day I was at a gathering of digerati and media types and was talking to a well known and sucessful entrepreneur and a well known and sucessful technology journalist. Somehow the subject of ADD came up and I said, "I am surely ADD although I’ve never been diagnosed as such". They both laughed and acknowledged that they too were surely ADD.

Growing up I never was able to study for long periods of time, could never watch TV for long periods of time, I’d always move on to something new. I can’t do repetitve work for more than 15-20 minutes without going crazy. I don’t like to drive if I don’t have to becaue my mind wanders. I am curious to a fault and am terrible at organizing things. I just pile stuff up, and move on to new piles. It drives the Gotham Gal crazy.

But if you look at most successful entrepreneurs, they exhibit many of these characteristics too. They can’t focus on anything for long periods of time, but they lunge into new stuff with a voracious appetite to figure it out.

I don’t know about the clinical side of this disorder. I am sure that there are many cases where the disorder is terribly disabling. But I really wonder if a moderate amount of ADD is a bad thing. I think it may in fact be a good thing. It’s certainly a trait I have come to know and love in entrepreneurs.

Pedro On The Bench When I started this blog, I looked for regular things to post on a set day each week. It got me into a routine and it worked well.

That’s been the drill for the past couple years.

But it’s not working for me anymore. I feel compelled to post those thoughts at a set time and its turned into a chore. So I’ll still post mp3s to my blog, but not just on Monday mornings. I’ll do it whenever I am hit with the urge to do it. And I’ll blog cliches with the heading VC Cliche of the Week but they are going to come whenever I have the urge to post one. And I’ll do my Nuggets posts the same way – when I feel it.

It’s going to work a lot better and you aren’t going to have to read crappy forced posts like the one I put out on Wednesday morning. 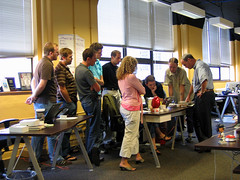 This post is about FeedBurner doing something great for me, once again.

Yesterday, I put FeedBurner’s "smartcast" on all my feeds and now the flash videos I post are available in Bloglines, MyYahoo, and several other popular web-based feedreaders.

This is a huge deal for me. Well done FeedBurner (that’s the crew in their office in Chicago).

While I am on the subject of FeedBurner, don’t miss my post on how I see feed powered ads playing out and what I think FeedBurner’s role will be in that ecosystem.

Two of my favorites. This cracked me up. On Monday there was a lot of discussion about TechMeme’s use of feeds to power their new sponsored posts section. Jeff Jarvis likes it and so do I.

The next day Digg and Techdirt started running feed powered ads provided by Symantec in the coveted top right section of the page. Chas from Federated Media has good post on these deals. I assume he was involved in the deals but am not sure.

Mike Arrington said in the headline to his post which I linked to up top:

Yes, the feed powered ads are cool. But they are hardly new. cNet’s been doing them for a while and I can think of literally dozens of cases where feeds have been used to power an ad unit.

Here is why feed powered ads are so great. The ad unit simply is a mini feed reader. The advertiser retains real time control of what goes into the ad. They simply update their feed and the ad changes. And it brings advertising and content closer together.

The best example of that is TechMeme. The "sponsored posts" are in fact just that – posts from oBlog, Socialtext blog, and Wink blog. Sure they are ads for their respective blogs, but they also contain content that is relevant to the reader of the ad.

For now, this feed powered advertising is being done on a limited basis with a few sites and a few advertisers participating.

But feed powered advertising is screaming out for a full blown platform to support this model. Because the ads are in fact feeds, you should be able to subscribe to them and have them go right into your feed reader. The ads should rotate so you don’t see the same feed or post promoted as you surf around the web (cookie powered frequency caps). The ad unit should be flash capable so that the feed could be a podcast or video feed. And of course there needs to be analytics about how the ads are performing and how many new subs they are generating.

Ideally this whole ecosystem should be served by a network. There are many feeds out there that are in fact advertisements or offers. The iTunes top album and top songs feeds have been around for several years. Feeds that are ads or offers should be available to any and all publishers who wish to run them and get paid for doing that (with the typical controls so your feed powered ad doesn’t end up in a place you don’t want it).

Both the platform and the network are coming soon from our portfolio company FeedBurner. They have a large network of publishers, 252,000 at last count, and a growing network of marketers who run feeds through them that are ads or offers. So the ecosystem for feed powered ads is there and the platform and the network are just around the corner. I am really excited about the possibilities.

I see feed powered ads as a natural evolution in the disaggregation of media. Publishers won’t control where their content is consumed and advertisers won’t either. Both will put the content (and ads are content) into the ether and it will go where it will go. As long as both can be tracked, measured, and monetized, it’s going to be better for everyone. The Killers’ Hot Fuss was the record of choice in our house in early 2005. We listened to it all the time and I posted on it several times. We saw them live at Summerstage last summer and it was one of the concert highlights of 2005 for our family.

The Killers are back with Sam’s Town which was released in the UK this week and will be released on Oct 3rd in the US. You can pre-order on Amazon now. We got the record yesterday and have listened a few times.

The single, When You Were Young, has been all over the radio and the internet for months. I blogged it in mid July. The word is that the new record is Hot Fuss meets Born To Run and certainly When You Were Young sounds like it. And there are many other parts of the record that sound that way too.

That said, I don’t think Sam’s Town is quite as strong as Hot Fuss. It’s lacking the singles that Hot Fuss had on it. But I like it better in some ways. It’s more interesting.

The middle of the record features two back to back songs that I really like.

I wasn’t there to sample this crazy chowder so I am not recommending the recipe.

But the real time blogging cooking thing Jackson is working here is impressive.

It sort of begs for a videocamera and YouTube.

Well my my. YouTube is not the leader after all.

Sorry about the crappy formatting. This was a cut and paste from an email.

Note: Streams are attributed to the property that provides the stream.  For example, the
YouTube data include streams that occurred on their Web property and on other properties
Whereby YouTube provided those streams.

The big surprises are Yahoo! at the top and Google so far down. And of course, MySpace ahead of YouTube. Gotta love MLB. Yes, baseball is still relevant on the Internet!