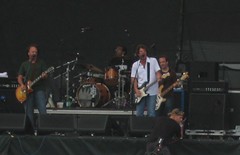 Dean Sings "Piss Up A Rope"
Originally uploaded by fredwilson.

Ween, The Flaming Lips, and Tom Petty. What a great day!

The day got going for me when Ween came on. They played all my favorites. I just love these guys. The best part was when Dean Wean sang Piss Up A Rope. The crowd roared and sang along. I bumped into both guys this morning in the hotel and let them both know how much I love them.

The highlight of the day was The Lips. The clouds cleared up, the sun came out, and all kinds of wacky things appeared on the stage.

Wayne Crowd Surfing In The Bubble
Originally uploaded by fredwilson.

Then Wayne went crowd surfing in a bubble. What a great stunt.

They also played most of their big hits. Wayne got political with his intro to the Yeah Yeah Yeah song but the crowed seemed to take in in stride. 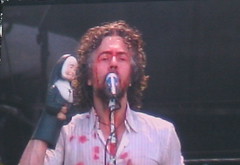 Wayne told the crowd that he’d bumped into Ben Kweller backstage and after hearing of his nosebleed incident, decided to copy him. So he poured blood all over himself and played the whole show that way. This picture is of him singing Yoshimi.

If you have never seen The Lips play live, you must do it. It’s certainly one of the most entertaining shows I’ve seen.

Then we waited an hour for Tom Petty to come on. As my friend said when he walked on the stage, "rock greatness is upon us". He played the songs the crowd wanted to hear, he played them straight up, and they sounded great. 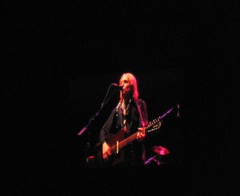 Unfortunately, the threatening weather that had cleared for The Lips came back and the skies opened up and it poured. We walked out to the sounds of his new single, Saving Graceand The Travelling Willbury’s Handle Me With Care

We got totally soaked getting home, but the sea of people walking down Barton Springs Road on the way home in the rain was a very cool scene.

Austin City Limits was a blast.