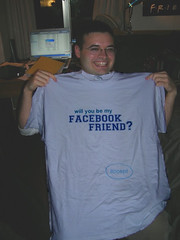 Will You Be My Facebook Friend?
Originally uploaded by Notnek.

As many have observed over the years, when a noun becomes a verb (googling, skyping, aiming, etc), you know you are onto something big.

Over the past several years, the word friend has taken on verb attributes.

Friending someone on a social network has become an every day activity. Barely a family dinner goes by without one of my kids talking about friending somone or requesting a friend of someone. It’s a big part of what they do online.

I first came across this friending thing on LinkedIn which I joined several years ago. I’ve probably recieved 300 to 400 requests to add someone to my LinkedIn network and I’ve accepted 122 of them. I’ve basically taken the approach that I only accept requests from people I know pretty well. That always made sense to me. I generally don’t reject the rest. I just let them expire.

I’ve had a MySpace profile for about a year and have six friends, including Tom. I have used it mainly to understand what happens on MySpace and for some reason, even though I have linked to it several times on this blog, I’ve never gotten many friend requests. That’s fine with me although my kids and Charlie have made fun of my lack of friends on numerous occasions.

Last week I linked to my new Facebook profile and have recieved over 50 friend requests since. I’ve accepted the people I know or think I know and am debating what to do with the rest. If they aren’t friends, should I make them friends?

This is an important question in my mind. And last week’s Facebook backlash points out why. As Fred Stutzman pointed out in a comment to my post on the topic:

Facebook is an interesting place. Users "friend" each other as a
show of affection – its cultural currency on a college campus. As I’ve
seen in my research, users average hundreds of friends – obviously more
friends than anyone could juggle. Implicit in this mass "friendship" is
that the bond is weak. More or less, people in the Facebook aren’t
checking all their "friends" profiles every day – nor do they care to.

Facebook has changed the cultural definition of friendship in the
service. When people friended each other, all it meant was you were
friends – not that the people you friend get to see everything you do
in your life. Yes, people could stalk this information from you if they
wanted – but there was safety in numbers, in the sense that this sort
of stalking behavior wasn’t the norm.

Friendship has been defined on most social networks as the people who get their faces on your profile. But as these social networks start to add real applications/utility on top of the relationship maps it’s going to create issues. Friendship is not a monolithic thing. It’s a nuanced thing.

It’s time for some granularity in this friendship thing. Best friends, good friends, old friends, new friends, friends of friends, etc. The management of Facebook might even be thinking of adding this functionality now in order to quell the backlash around the "news feeds" they rolled out last week.

The thing is, I am not sure it’s going to work from a social engineering perspective. Will people be comfortable rating their friendships online? That’s going to cause some problems as this scene from the myspace movie shows.

Or you can fast forward to 6:48 in the player below: