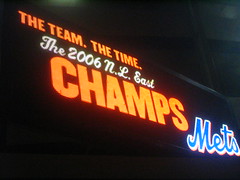 I was in a cab coming home from the airport in August or September of 1984 and listened to Doc Gooden strike out like six guys in a row in a complete game. It was humid and the game crackled on the radio. I was hooked. I had just moved to NYC and I was going to be a Met fan.

I’ve been a Met fan ever since and there’s been some hard years. But not this one (so far anyway).

And so it was fitting that I was in a car home from the aiport last night listening to the Mets clinch the NL East, a foregone conclusion for the past month and a half, buit it doesn’t matter.

It feels great to be a Met fan this morning!

Here’s some posts from other Met fans I read: