MySpace is the AOL of Social Media/Web 2.0 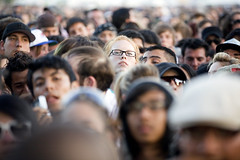 Picked from the crowd (2)
Originally uploaded by Iv0/0vi.

Ross Mayfield said at the Web 2.0 conference last year that "web 2.0 is about people".

He’s right. What’s really happening, to steal a phrase from my partner Brad Burnham, is that the Internet is being reconstructed around people instead of pages/content.

In the web 1.0 world, AOL tried to build a walled garden around it’s content. Yahoo!, Google, and others went the open web way. We saw who won that war.

I’ve said several times in this blog that MySpace is the "AOL of blogging". I see blogging as the most open form of social media so that’s why I used that term. MySpace made it simple and necessary for people to have a place on the web that represents them, the people they like, the things they like, etc. And MySpace took off for several reasons, but one of them certainly was the flexibility that people had in changing their pages and putting whatever they wanted on them. The people who use MySpace for their social media platform will be able to leave it for a blog or some other form of social media, if not today, then certainly tomorrow.

Now that they have attained the status as the leading social media platform, News Corp/MySpace is talking about changing the deal. Peter Chernin said:

“If you look at virtually any Web 2.0 application, whether its YouTube,
whether it’s Flickr, whether it’s Photobucket or any of the
next-generation Web applications, almost all of them are really driven
off the back of MySpace.”

“Given that most of their traffic comes from us,” he said, “if we build
adequate if not superior competitors, I think we ought to be able to
match them if not exceed them.”

But if they take the latter approach and start limiting the ability of others to "drive off the back of MySpace" then they will be sowing the seeds of MySpace’s decline. The web values openness over everything else. It always has and always will.

I am not the only one talking about this issue. Here are some other links worth reading on this topic.