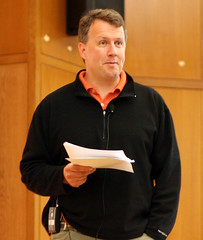 I enjoyed the interview that Paul Graham did with TechCrunch.

I agree with most of what Paul says, in particular what he says about web 2.0 and developing products and services:

To me “web 2.0″ translates to “web.” And web technologies don’t appeal only to a small niche. Web-based email services have hundreds of millions of users. The network (in the broader sense of the Internet plus the phone networks) pervades everything now.

We’re pretty open about what we think makes a technology stick. We print it on T-Shirts: “Make something people want.” If you had to reduce the recipe for a successful startup to four words, those would probably be the four.

The only beef I’ll take with the piece is this part:

It may not be a coincidence that both Flickr and Del.icio.us avoided the usual VC route.

Last time I checked Union Square Ventures was a VC firm and we did invest in delicious. But maybe Paul means we aren’t a "usual VC firm". If so, that would be fine with me.