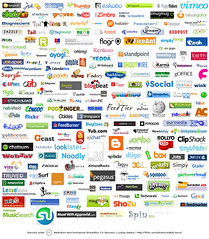 The San Jose Mercury News had an article this past weekend with the latest VentureOne numbers. Apparently $260 milllion was invested in "web 2.0" companies in the first half of 2006, which means that the run rate for the year is $500 million.

I exchanged emails with the reporter, Constance Loizos, and I was quoted in the piece:

`Everyone jumps into the latest VC trends. That’s how the business
works, for better or worse,” said Fred Wilson, co-founder of Union
Square Ventures in New York.

Whenever I get interviewed, I always wonder why one quote gets chosen over the others. In the spirit of full disclosure, here is my entire email to Connie on the subject of the VentureOne numbers:

Everyone is jumping into the latest vc trend

That is how the business works, for better or worse

And I honestly don’t know if its better or worse

Probably a bit of both

I surely don’t know. It means ‘stuff that vcs want to invest in right now’ it seems

That said, we believe that lighweight web services built on top of commodity/open source infrastructure are very capital efficient and highly scalable businesses. We look for those that have a social and user contributed component and create network value

That’s a mouthful so ‘web 2.0’ is just a lot easier to say. I am sure others would define it very differently

Btw – our investment pace in this sector is about the same as it was last year, and the year before. We aren’t’ really fans of stepping on the gas.  We prefer consistent investment in the areas we know well year in and year out

I hope this is helpful