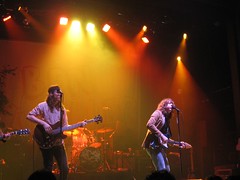 Readers of this blog know that I am a big fan of Ben Kweller. He played a show last night at Webster Hall and I went with Jessica and her friend Lola and their music teacher Vin who is also the coach of the Four Fellas.

I didn’t take a camera (still or video) but there are tons of photos from the show on Flickr already. So I"ll showcase a few of the ones I like best in this post.

Ben is a talented musician (he played every instrument on his new record). He also has great musical range, and during the concert he goes from alt-country, to meatloaf style piano songs, to straight up rock and roll. We saw all of that and more last night.

But most of all, Ben Kweller writes great songs, the kind you can’t help but sing along with. And the crowd sang along a lot last night. 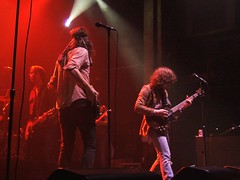 Ben finished the show with a rocking version of his best song (in my opinion), Wasted and Ready. This photo was taken during that number.

Afterwards we hung around until after the crowd had left and then went upstairs and Ben was hanging out in the VIP section with his label, ATO, and friends. We walked right in, nobody stopped us and talked to Ben. I’d met him at Austin City Limits and Vin knew him too. The girls asked Ben to come play at their school when his tour is over and he’s back in NYC. He said he’d consider it. What a great guy!

Ben’s playing another show tonight at Webster Hall. I don’t think the show was completely sold out last night (although it was certainly pretty full). So if you want to see a great show and great musician, go over there around 8:30pm and get yourself some tickets. Maybe he’ll play I Gotta Move and I Don’t Know Why (my two favorites from the new record). He didn’t play either of them last night.