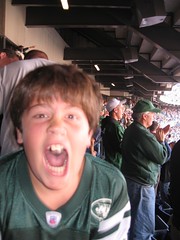 Jackson, D, Josh and I went to see the Jets play the Colts today.

It was a very thrilling game, capped by Justin Miller’s 103 yard kick return with 2 minutes to go which put the Jets up by four.

This photo is Josh reacting to it. Everyone was going nuts.

But Peyton Manning calmly marched the Colts back down the field witout any timeouts and won the game for the Colts.

The last play of the game featured one of the longest flea flicker plays I’ve ever seen with at least six or seven Jets touching the ball before it was over.

We had a blast but it would have been more fun if the Jets had come out on top.