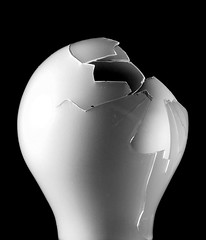 He was all out of ideas
Originally uploaded by Patrick.T.

According to The New York Times, Sevin Rosen has decided not to raise Fund X (ie their tenth fund) because:

“The traditional venture model seems to us to be broken,” Steve Dow, a
general partner at Sevin Rosen Funds, said in an interview.

That is an opinion not to be taken lightly. Sevin Rosen is a quality firm with a ton of experience doing venture deals over almost 30 years.

But it reminds me a bit of the analysis that Paul Ferri and Howard Anderson have put forward in recent years. The model that worked for the past 30 years isn’t going to work as well for the next 30 years, that’s for sure.

But it doesn’t mean that the "venture capital model" is broken. It means that we have to adapt to the changing nature of the technology business.

When Brad and I sat down in mid 2003 to write a business plan for Union Square Ventures, we listed the trends we saw developing in the technology business. These are some of the big ones:

1 – commodization of the core infrastructure of the technology business
2 – community powered development environments – ie open source
3 – software delivered as a service over the internet
4 – a movement toward lightweight web services – ie web 2.0
5 – the globalization of technology development and consumption

Taken all together, these are big changes to the technology business. We have left the phase where the infrastructure gets built. That’s done. Those investments arent’ going to pay off that well anymore. We are now in the phase where the services get deployed on top of that infrastructure. We are in what Carlotta Perez calls "the Golden Age" where technology gets deployed throughout society (and I mean the global society, not just the developed world).

And on top of all that, we have entered a new phase in the capital markets where the IPO market is not nearly as attractive of an exit as it used to be. Sevin Rosen, in its letter to its investors, described:

“a terribly weak exit
environment,” a reference to the dearth of initial public offerings and
to a market for acquisitions at valuations that it considers too low to
deliver the kind of returns that venture investors expect.

I’ll take exception to a some of that analysis. The IPO market certainly isn’t what it used to be, because of Sarbanes Oxley, because of the really bad companies we in the VC industry foisted on the public markets in the late 90s and the long memories of institional investors, and because many entrepreneurs don’t want to run public companies anyway. But the M&A market is really quite healthy. Talk to any of the M&A bankers you know and you’ll find out that they are having great years. Maybe they can’t get us the valuations "that venture investors expect", but that is the venture industry’s fault because we’ve overfunded our companies to the point where we need a half billion dollar exit to produce a decent return.

We’ve got to raise smaller funds.
We’ve got to do less "hard tech" and more "soft tech"
We’ve got to figure out how to make great returns on $100mm to $250mm exits
We’ve got to limit our IPOs to our very best companies

I actually think that many firms have already made many of these changes as part of the brutal restructuring of the venture capital business in the 2001-2003 time period and are much better off because of it.

But there is one more issue in the Sevin Rosen letter that I want to address and it’s this part:

Explaining its decision, Sevin Rosen, which has offices in Dallas and
Silicon Valley, said that too much money had flooded the venture
business and too many companies were being given financing in every
conceivable sector.

Yup. Too much money chasing too few good deals. That’s been the chorus since I got into the VC business in the mid 80s. It’s been that way for at least 20 years and it’s going to be that way forever more. It’s also true of every major asset class out there, real estate, buyouts, hedge funds, energy, etc.

Which means you have to be with the best managers who have a strategy to navigate through an "efficient market" and make it work for them. I am confident that there are many good VC firms in business today who can do that and that the "VC model" isn’t broken for everyone.