It's Time To Help Claire 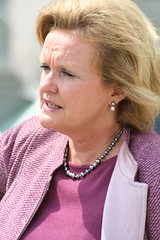 The New York Times today reports that the Republican party is pulling out of Ohio as they’ve concluded that Mike DeWine can’t beat Sherrod Brown. That’s great news for Sherrod, but bad news for our other favorite Senate candidate, Claire McCaskill of Missouri.

According to the New York Times:

At the start of the fall campaign, national Republican leaders
developed a strategy to pour most of the national money into three
states — Ohio, Tennessee and Missouri — to create a firewall against a
Democratic takeover. One Republican Party official said Mr. DeWine’s
continued problems in Ohio had persuaded them to in effect rebuild a
firewall that has now partly collapsed, and to find a state to replace
it.

I take that to mean that all of DeWine’s money is now headed to Missouri and Tennesee to fund negative attack ads against Claire McCaskill and Harold Ford.

I am most concerned about Claire because I know her and like her. She’s not some wacky liberal. She’s a tough pragmatic former prosecutor tuned state treasurer who came a couple perecentage points from getting elected Governor of Missouri in 2004. I’ve met with Claire on a number of occasions. She’s the kind of Democrat who has friends on both sides of the table and can get stuff done.

But she’s going to get pummelled with crap like this that has already shown up on YouTube.

The only thing Claire can do is fight back, and fight back hard. And the way our political system works, that means Claire needs more money. Don’t get me started on the need for campaign finance reform, I’ll save that for another post.

For now the only thing you can do if you want to help Claire is go here and send her some money.