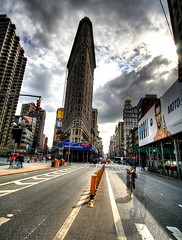 I’ve been doing tech VC deals in NYC since the early 90s. And it’s always been the same refrain, the one that Dan Cornish made on my Salary Search post this weekend:

The reason it costs so much in NYC is because start ups compete with
Wall Street for talent. The money on Wall Street skews the salary
curve. Also the cost of living is CRAZY for middle class people. A rock
start programmer in NYC making 120K is just getting by. The same
programmer in Austin making 120K is living like a king. Starting a
software company in NYC is borderline irresponsible. There should be a
really compelling reason to do it. Attracting good talent is not one of
them. I submit there is better talent outside of NYC because most
really good developers are smart people and they also like to live well.

I don’t think it is "borderline irresponsible" to do a startup in the NYC area, in fact I think it’s a great place to do a startup, but I agree with the dilemma that Dan and others have been pointing out for years – it costs a lot to live in NYC and the best developers can make a ton of money working on wall street. So what do you do about it?

Well here is what the seven Union Square Ventures portfolio companies do about it:

Company 1 – has it’s architects and designers in NYC and all of it’s developers are in Russian
Company 2 – has it’s product management in NYC and all of it’s developers are in a suburb of Philadelphia, a short car drive away.
Company 3 – the founder was in NYC, the dev team was completely virtual, scattered all over the country
Company 4 – the business team is in a suburb of NYC, the tech team is in Austin, TX, and some development done in India
Company 5 – the software guys engineers are in NYC, the hardware engineers are in New Jersey
Company 6 – the entire team is scattered geographically currently, but the headquarters is in Brooklyn, with development scattered around with a virtual team approach
Company 7 – the majority of the software engineering is done in NYC, with bits done in Israel and India

So there you have it. Not one single Union Square Ventures company that is headquartered in NYC currently has all of its engineering team in NYC. Each has organized development and engineering differently to suit the needs of the business and to involve people they know and trust.

I am not suggesting this is the only model that works in NYC. I have two Flatiron portfolio companies, Alacra and Return Path, with development teams in NYC.  Alacra does all of its development in NYC and makes it work.

What I am suggesting is that entrepreneurs should start businesses where they want to work and then organize the company according to what works best for them. The whole company, particularly development, does not need to be in one location anymore.