To Participate Or Not? 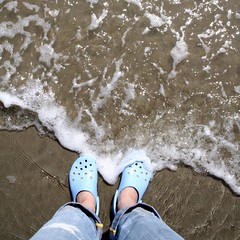 A portfolio company of mine (which will remain nameless for the purposes of this post) was the topic of conversation on a fairly well known tech blog recently.

I emailed the link to the CEO. The CEO replied back that “they had seen it” and that some of the comments were not correct.

I emailed back that the company might want to weigh in on the comments to correct the inaccuracies. And sent along a link to one of my posts where Magid Abraham, CEO of Comcscore, did just that.

The CEO emailed back that they are having a debate inside the company about how best to handle this issue. Should they weigh in and bring more attention to the post and the comments? Or should they ignore it?

Being the hyper blogger, that I am, I suggested that ignoring blogs is like ignoring the Wall Street Journal these days. I am not sure which has more readers (I do know – I was just making a point).

I post about this email exchange not to prod this particular CEO who is probably cringing as he reads this. He and his team have valid concerns. There are always going to be loud mouths who don’t like a company or a technology and will bash it at every chance they get.

My “Why Are Ads So Hated” post brought out the ad haters in mass the other day. My posts on Comscore certainly surfaced the anti-panels/pro-weblogs crowd. Magid was pretty brave to wade into those comments and he took a few hits for doing it.

But having “lived” in this world for three years now, I can safely say that the companies that take the time to respond in the comments and publish a blog of their own (both are necessary, you really shouldn’t only do one and not the other) are treated with a lot more respect than the companies that just ignore the whole phenomenon.

It makes sense. Blogs are about having a conversation in public with the world. If you don’t want to participate in that conversation, they are going to have it without you and they aren’t going to feel any need to be polite to someone who doesn’t bother to show up.

This makes the marketing job different than it was five years ago. You have to track what is being said about your company. The company that I started this post writing about clearly knows how to do that. So do most companies these days. There are a handful of really good tools to do that. But weighing into the comments and posting directly on your own blog are time consuming efforts that have to be handled well. When you are posting a comment or a post that speaks for an entire company, it has to be well written and persuasive. It’s like writing marketing copy all day long. And I think the CEO’s voice needs to be heard from every once in a while as part of this process.

But maybe this is where marketing is going. Maybe the marketing person can afford to spend a bit less time on the corporate website (make it a blog), the marketing collateral (put the URL on a business card), the PR firm (go straight to the market via blogs). This clearly works in pure web oriented companies today.

For those who are operating in more traditional industries, you probably can’t walk away so quickly from the traditional techniques. But you must pay more than attention to the blogs. You must participate in the conversation.