We Live In Public 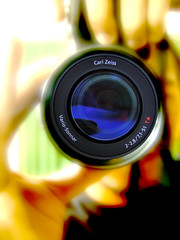 Are you ready???
Originally uploaded by ssh.

Back in the last Internet bubble, Josh Harris created an experimental art project he called We Live In Public. To quote from the link I just gave you:

We Live In Public is an experiment created by Josh Harris.  Similar to the tv/internet project Big Brother, he has placed 32 robotic cameras and microphones throughout his home (including the toilet), which he shares with his girlfriend Tanya Corrin.
The phones are tapped as well. Their lives are broadcast over the
internet 24/7. Watchers can talk to Josh and Tanya as well as each
other in a chatroom
on the site. Aside from Josh And Tanya, there is a whole cast of
characters that make cameo appearances in the loft as well as in chat

As Tom Watson said in this post last year:

Turns out, Josh Harris’s crazy experiment with Web-connected cameras in his New York loft was prescient.

I think everything Josh Harris has ever done is prescient. Crazy too. But that’s not the point of this post.

We are living in public more and more every day. It’s becoming the norm. Our kids out their personal lives on their MySpace and Facebook pages. We blog about what we did this weekend and where we ate last night.

I use the AttentionTrust recorder to record all of my clickstream and share them with others (on this blog and via the attentionsoft client).

Yesterday I got a voice mail from Jason Calacanis. Turns out he had seen my morning’s clickstream on Seth Goldstein‘s computer out at Web 2.0. He left me a message about a particular real estate web page that I had been looking at. It took me a second to figure out what was going on. Fortunately the AttentionTrust has an off button. I think I’ll be using it more often now. Once bitten twice shy.

Technology allows us to broadcast our lives so easily. Then one day you wake up and Facebook is telling the world that you broke up with your girlfriend and you get pissed. There’s a limit for sure.

I have never put a camera in my toilet and have no intention to do so, but I have put pictures of my kids on this blog and regretted it when the comments got mean. I’ve let the world see my clickstream and seen the downside of that too.

I am a fan of transparency and will continue to push the envelope of what is sensible. But there is a line and when I cross it, I will pull back.