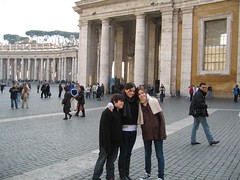 I was raised a roman catholic, rejected religion for the most part in college, married a jew, raised three jewish kids, and am not sure what to call myself.

Today I got to play to my latent catholicism as we visited The Vatican with a lovely guide named Gloria who showed us everything we had to see but also had a sixth sense when the kids were getting tired.

I have never been in the Sistine Chapel and I must say it is an amazing place. We watched Good Will Hunting the other night as a family in our hotel room in Siena after dinner and there is this scene where Robin Williams delivers this great monologue to Matt Damon, the highlight of which is when he says "you may have read everything there is to read on Michelangelo but you’ve never stood in the Sistine Chapel, smelled the scent of the place, and witnessed his greatness" (or something like that).

Anyway, as I was watching, I realized that I had never done that either. Today I did and it was pretty powerful.