This is a cool last.fm widget
I found today. It shows your recent listens in the familiar iTunes
interface (but on london time).

Wallstrip‘s monday show, Jack In The Box, which I ran on this blog was certainly one of the funniest things they’ve done so far.

So I am fascinated about the way it came about. One of the show’s viewers, Shane from WallStreetFighter, came up with the idea for the show and sent it to Howard. Now that in itself is pretty great. Does SNL take skit ideas from the people who watch it? I am not sure, but I think they should.

And Jason and Amanda from The Peeled Apple did the music and the vocals, which are a big reason why the show was so good.

So that show was a colloborative effort between Wallstrip and a number of bloggers. From the start, Howard has been serious about using blogs as the fabric of the show. I met Howard from his frequent comments on AVC. I would bet that he met most of the people involved in Wallstrip the same way. He is a master of networking via blogs.

So a natural next step would be for Wallstrip’s network of bloggers who watch the show, comment on it, and link to it, to start developing ideas for it. And there we have it – Jack In The Box.

What’s next? Does Wallstrip put up a page on YouTube where its fans can contribute shorts of their own about stocks? Does Wallstrip start recruiting talent for its shows from the audience? Who knows, but one thing I am sure, Howard is going to push the envelope of community powered TV. He gets it.

Betting On The SuperBowl For Charity

Charlie is trying to raise $1000 for charity with a super bowl pool for bloggers.

I gave a keynote at the Information Industry Summit yesterday and tried to be provocative. The title of my talk was "Does Information Want To Be Free" and the presentation is available on the Union Square Ventures weblog.

UPDATE: Thanks to Scribe Media, there is also now the video of my keynote up on the Union Square Ventures weblog. Same link.

I wrote the following about YouTube the other day:

I went through a period where I wrote about YouTube a lot. It was
fascinating to me to watch web video take off and the lessons we all
learned from YouTube’s success were important.

I am an afficianado of web services. I love using them, figuring out how they work, the neat stuff you can do with them. I learn so much from using the web. And I try to write about it as much as I can.

For some reason I woke up this morning thinking about Flickr. And it occured to me that I’ve learned more about how to create a great web service from using Flickr than any other service. By a long shot.

8) Engagement metrics like comments, favorites, views, can and should be used to drive discovery (the most interesting algorithm)

10) Machine tagging (autotagging) is the next big thing in web 2.0

I whipped off this list in about three minutes so I am sure I’ve missed a bunch of other stuff I’ve learned from Flickr.

Many people will say "Google is the seminal web 2.0 service". But I don’t think so. I’ve learned a bunch of things from Google too, but Flickr has pushed the envelope in so many ways at such an important time (’04 and ’05) that it gets my vote. Our family loves japanese food and we go out for sushi often. But the girls decided it was time to figure out how to make a japanese dinner at home.

So on Sunday, they did just that.

Jessica and Emily went to a cool Japanese store in the east village and got the raw materials. And they spent the afternoon cooking.

It turned out great. The Gotham Gal has a bunch of the recipes and more photos on her blog.

My Afternoon In Midtown 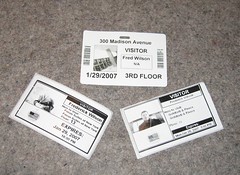 My Afternoon In Midtown
Originally uploaded by fredwilson.

I spent yesterday afternoon in midtown manhattan. In the span of about three hours in midtown, I accumulated three of these visitor badges.

I realize why we have this security in midtown and wall street. I lived through 9/11 too.

But given the choice, which fortunately I have, I would never locate a business in one of these high security buildings. It’s a pain to visit them .

Discuss on Twitter
View Discussions
#NYC#Photo of the Day
Jan 29, 2007

Looking Up The Stack For What's Next

My partner Brad Burnham has written a very thoughtful piece on what’s next on the technology stack after data.  Brad states:

One way to look at that question is to argue that we have arrived at
the end of history. The progression to date has been up the stack in a
classic architecture diagram, data is on top of that stack, and nothing
sits on top of the data. I disagree.

Brad argues that governance is next on the stack and values may be on top of that. I’ve heard Brad articulate these views privately for years. I am glad he finally put it out there so we can debate it.

A Jack In The Box

I knew it the minute Howard told me that Wallstrip was doing a show about Jack In The Box (JBX). I still have that SNL song A Dick In The Box running around in my head. That short has been watched over 12 million times on YouTube. That’s impressive.

Anyway, Howard and Linsday, do the Andy Samberg/Justin Timberlake duo thing pretty well. I particularly like Howard’s work on this one. He may never live it down. 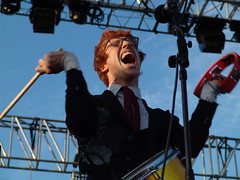 I got an advance copy of the new Arcade Fire record, called Neon Bible.

This number is called Antichrist Television Blues. I hope you like it.

Now does anyone know how I can get a couple tickets to the Judson shows in mid February? Andrew and I went online at 9am on Jan 5th as suggested and were shut out instantly.