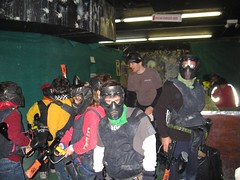 Josh’s friends convinced their dads to take them to Long Island City for an afternoon of Paintball.

The boys were a little scared at the start. Would it hurt to get hit? How come the guns were so loud?

But after about one second in the first battle, they couldn’t get enough of it.

And neither could the dads, at least this dad. At one point I thought I was Rambo. I charged the middle, jumped over the barrier, hit the ground, crawled forward, and took out the other side.

Now I am not much for guns and killing and war. But I must say, a little pretend battle during a cold February afternoon was pretty damn fun.