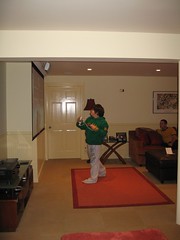 Josh Boxing On The wii
Originally uploaded by fredwilson.

Josh has been after us to get a Wii in our house. We thought about it for his birthday but couldn’t find it in stock anywhere, so we went in another direction.

We got to The Ghetto Ranch, my friend Mark’s place in Aspen, late Friday night and the first thing Josh sees is an unopened Wii. He begged me to open it. We held off until we got Mark’s permission. Which came yesterday morning.

So we set it up in the home theater in the basement and Josh was boxing in front of the drop down screen within minutes. It was a breeze to set up and works great.

And the thing about the Wii that is so amazing is the aerobic workout you get when you play with it, particularly boxing and tennis. You sweat when you play this thing.

So we are going to get rid of the Xbox360 or the Playstation2 and get a Wii. A game console that gets you off the couch and working out rocks!