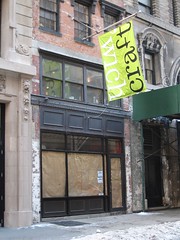 When Craft?
Originally uploaded by fredwilson.

‘wichcraft opened its first store around the corner from our office here on Broadway and 21st about three years ago. I used to eat there at least once a week. I loved the sandwiches and the laid back vibe of the place.

Over the past year, ‘wichcraft expanded all over the city to midtown (46th and 5th), Tribeca (corner of Beach and Greenwich), Bryant Park, West Chelsea (269 11th Ave), The Village (Eighth Street and Broadway), and Soho (corner of Crosby and Prince). They’ve also expanded to San Fransciso and Las Vegas.

But they closed the initial location well over a year ago and I’ve been at a loss to replace them in my weekly lunch routine.

Late last year, right underneath my office window, I saw a ‘wichcraft flag go up and got really excited. ‘wichcraft is opening right next door on 20th Street between 5th and Broadway.

But as each week goes by, I see no activity that gives me comfort that my favorite sandwiches are coming back. I am now calling this store whencraft.