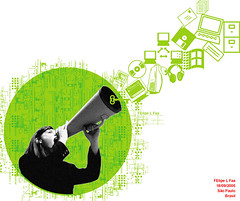 The thing I love most about the era of web services we are in is that no web service/company owns the entire stack. As massive as Google is, they only “own” one, maybe two, layers of the value chain (search and CPC ad services). They may be on their way to owning a few more. Maps certainly comes to mind. And with the purchase of YouTube, they certainly own my web video platform of choice.

But the web value chain is huge and there are so many important services out there. Want a marketplace? There’s eBay. Want hosted storage, bandwith, and servers? There’s Amazon. Want knowledge? There’s wikipedia. Want classifieds? There’s craigslist. Want photos? Flickr and Photobucket and Slide. Want bookmarks? There’s delicious. Want feeds? There’s FeedBurner. Want social networks? MySpace and Facebook.  I could go on and on but I’ll spare you.

And because of open APIs, feeds, and mashups, users and developers can mix and match these services together to create a better web experience for everyone. These services and many others combine to create the infrastructure of the Internet.

After using Twitter for the better part of the past month, I think it is going to join that list if they haven’t already. What exact role is Twitter going to play?  It will be the status broadcasting system of the Internet.

I don’t change my away message on my instant messaging client very often. When I am away, I’m not there to do it. But if I can send a text message to Twitter and it just happens, I’ll do that.

I don’t change my avatar’s audio as much as I’d like. But if I can send a text message to Twitter and it just happens via text to voice, I’ll do that.

I don’t consume local services very often on my phone because it’s a hassle to log in and tell them where I am. But if I could just send a text message to Twitter with my location and information starts coming to me on my phone, I’ll do that.

If all these things happen because of one text message I sent to Twitter, that’s fantastic.

Like many of the services on that list above, Twitter doesn’t try to do too much. It’s a place on the web where I can broadcast my status (whatever that means to me). But I can do that via the web, SMS, and IM. And I can subscribe to other users’ status via the same three messaging systems. And it’s all open because anyone’s status is a feed.

Someone said to me today that Twitter is a "SMS to feed platform". I think it’s a bit more than that, but like all great web services, the people who built it reduced Twitter to its simplest usable form and let the users decide what to do with it.

I am primarily using it to update my “status box” on my left sidebar using text messaging on my phone. Others prefer SMS in/SMS out, web in/SMS out, IM in/web out, SMS in/RSS out. Or combos of these modes. It doesn’t matter.

Twitter is a simple but flexible status broadcasting system. The web doesn’t have one yet and so Twitter is going to be it.

POSTSCRIPT: When I sent this post in draft form to Andrew, he replied, "yes, but …" He thinks Twitter can be even more, possibly replacing text messaging as the dominant form of mobile messaging. I have to dig into that a bit. When I do, I’ll blog my thoughts and Andrew’s in a follow on post.