You Got That Right Jeremy

Jeremy Allaire laid out a "vision" for the new medium of interactive web video yesterday in a keynote.

I call it the four rules.

I like what Joost is doing with their advertising formats. Instead of just copying the TV metaphor on the internet, they are experimenting to see what works. According to MediaPost,

Joost is offering
advertisers a range of formats beyond the traditional 30-second spot.
Ten-second and 15-second pre-, mid-, and post-roll options are all
available, all with interactive capabilities for users to delve deeper
into ad messages if they desire.

Another alternative is a roughly 5-second "Brought to You By…"
"introstitial," according to Elders. "We’re going to be doing a lot of
experimenting around our three core principles of targetability,
measurability, and interactivity," he said. "There are a lot of
unknowns, and we really don’t know yet what viewing patterns are going
to be like."

In addition, rather than interrupting programming, Joost will run ads
alongside content known as "hand-raisers," which users can click for
more information either within Joost’s platform or on a brand’s own Web
site.

What I’d like to see some brand try is a 3 second pre-roll, a 5-10 second mid-roll, and a 30 second post-roll, all tied together intelligently to tell a complete story if you watch all three ads. And supplemented by text or banner links for the deep dive. I think that would work really well on the Internet. After a month of listening to what I could get of this record on the Hype Machine, I got home last night and Favourite Worst Nightmare was sitting on the kitchen counter, having been pre-ordered so long ago I can’t even remember when.

It’s kind of funny listening to a record for the first time when you’ve heard at least half the songs at least a dozen times each. It still sounds brand new, but also comfortably old at the same time. I like the experience very much.

I knew this record was going to be good last year when the band put out one LP and two EPs with not a bad song on any of them. Alex Turner writes rock songs like Ray Davies. Catchy, witty, rock and roll. I’ll never tire of that kind of music.

This record flies by when you listen. 35 minutes, 12 songs. Most tracks are between two and a half and three minutes long. Quick punchy rock songs, delivered shotgun style, one after another.

Do Me A Favour and give this record a spin. You won’t regret it.

Is Modest Mouse Missing The Boat? My favorite track on the new Modest Mouse record is called Missed The Boat.

It’s a great song which you’ll enjoy if you just hit that play button. And it turns out it’s the next single on the record (first one being Dashboard). The other blogging Jackson (conveniently named Jackson West) points out in NewTeeVee that Modest Mouse is letting it’s fans make the video to this song.

Here’s a link to the contest page in case you are interested.

Jackson West isn’t so sure he likes this trend. He says:

I’ve been looking at some of these user-generated content contests
with a more critical eye of late. The attention economy is all well and
good, but Epic and Apple are into the economy economy — you know, the
one with cash money exchanged for goods and services.

Who owns the rights to your finished piece? Epic presumably owns the
original source footage, and you own any additional content created and
then composited in. So does that mean that you’re entitled to a cut
every time someone downloads the video from the iTunes Music Store?
What about sales of Modest Mouse retrospective DVDs that might include
the video?

Turker, a reader who wrote to me about that post, said to me:

I don’t feel that way at all. I’d love to make that video (it’s not going to happen because I’ve got a few other things to do right now). And I’d love it if my video was selected. I wouldn’t want any compensation. I’d be sharing my love for Modest Mouse and the song Missed The Boat with the world and that would be just fine with me. I suspect that the vast majority of the people who participate in this contest feel the same way.

Jackson West ends his post with the following observation:

So, exciting foray into mashup culture and media democratization, or way to get both advertising and publicity for free?

I’m leaning towards the latter.

Well yes, these user generated contests are a great way to get content and publicity for free. But in a world where a lot of Modest Mouse fans are getting their music for free as well, I am not sure that’s such a bad thing.

Web video shows are hit and miss. They don’t always work for me. And that is certainly true of Wallstrip. But I really like the way Howard talks about Oakley stock (OO) in this show, walking down the street with Lindsay. By the end of the show, you understand the thesis behind owning the stock. Plus the "man on the street" stuff always works for me. And no matter what, I always wait for the outtake at the end. It hardly ever fails to deliver a chuckle. 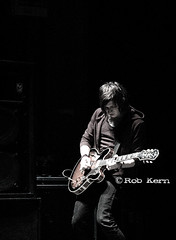 It happens to me between a half dozen and a dozen times a year. I get a record and can’t stop listening. I don’t even have this record yet. I ordered it on Amazon earlier this week. But I’ve been listening non-stop on Yottamusic. Check out my last.fm recent listens and you can see the obsession.

My buddies Tony Alva and Jackson and bloggers like Bob Lefsetz have almost convinced me that rock is dead. But then bands like Kings Of Leon and Arctic Monkeys come along and I just can’t agree.

Fans – Kings Of Leon – Because Of The Times

We are announcing a new investment today on the Union Square Ventures weblog.

The company is called TargetSpot and is an advertising system/marketplace for streaming audio.

You can read all about it here.

Why have many "web 2.0" service seen a significant dropoff in traffic in alexa in the past six months?

I used to find Alexa valuable for at least relative numbers. But given what’s been going on recently, I am not sure it can be trusted for anything.

Check out this chart for delicious and digg:

These two charts are almost identical in their shape. How can that be?

comScore Responds To The IAB

In case anyone didn’t know, I am a longtime investor and board member of comScore. I am a huge fan of this company which does the best job of measuring the Internet of any company that has tried. It’s a tough job because many people think that the Internet is perfectly measurable. Some aspects of it are. Others are not.

Anyway, last week the new president of the IAB fired off a public letter to comScore and Nielsen, the two leading internet measurement firms, seeking a third party audit of their measurement systems. Valleywag had the story up mid/late last week.

Everyone who covered this in the media was hoping for a fight. But as evidenced by this press release issued by comScore yesterday, it looks like comScore is going to cooperate with the IAB.  Here’s a quote from Magid Abraham, CEO of comScore:

“I want to assure the IAB
members that comScore is committed to the digital media industry and strives to
provide, to the best of its abilities, accurate and unbiased measurement.  We
look forward to working with the IAB and the rest of the industry on establishing measurement standards for all participants.”

Outside.in (a USV portfolio company) has published the 10 most "bloggy" neighborhoods in the US.

Check it out, maybe your neighborhood is one of them.

When you are at outside.in, you’ll notice their new look which launched today.

I think its very nice.