The Highline - NYC's Next Great Park 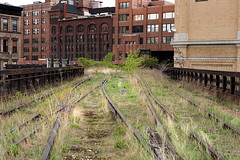 Yesterday we got a preview of NYC’s next great park, The Highline. For those of you who don’t know what The Highline is, it’s the elevated rail line that was built in the 1930s, down the lower west side of Manhattan. Here’s a brief history of it. What’s left of it now runs from Gansevoort Street up to the Hudson Rail Yards between 30th and 34th Street on the far west side.

There’s a long story behind the fight to save The Highline from destruction (Giuliani’s administration) to turning The Highline into a park (Bloomberg’s administration) but it basically goes like this. Two guys, Joshua David and Robert Hammond, met at a community board meeting to discuss the demolition of The Highline in 1999 and decided to do something about it. They formed Friends Of The Highline and eight years later and close to $120mm in funding, their dream is becoming a reality.

But it’s going to take another $50mm in private donations to finish the job. That’s where we (and you) come in. We decided to get involved in this amazing project recently and the first step was getting a tour of The Highline. We did that yesterday and I took dozens of photos which I cannot share with you because I promised not to publish them as a condition of being allowed to take the tour.

But if you want to see The Highline, head over to Flickr. There’s even a Flickr Group called The Highline which has over 200 great images to see. I went through all of them this morning and tagged my favorites in delicious in case you’ve only got time for a few photos.

But as cool as the design of The Highline is, what is there already and has been preserved is the star of the show. It’s a 18 to 30 foot high walkway through the cityscape of the lower west side of manhattan. The view of the city that you get from that perspective is unlike anything I’ve ever seen. And I’ve lived in NYC for almost 25 years now.

If you want to help close the deal on this amazing project, join Friends Of The Highline. You can donate here, but if you want to get involved and do more you can volunteer and/or help raise the seriously large sum of money that’s needed to finish the job.