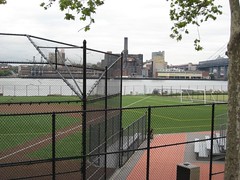 I was riding in the east river park this morning and came across this scene which struck me as evidence of urban renewal and the challenges it presents.

A beautiful green baseball and soccer field looking out over the east river. What a nice gift from the parks department.

In the background is the shuttered Domino Sugar Refinery which was built by the Havemeyer family in 1880. It operated consistently until it was shut in 2004. When the refinery was built, New York refined over 60 percent of the nation’s sugar. How times change.

According to Curbed, the Domino site is the subject of a landmark fight between the preservationists on one side and the developers on the other. Nothing new there. That’s life in NYC in the early 21st century.

Although these fights can get contentious and nasty, I think New York is doing a decent job at balancing the competing interests. We need new parks, ballfields, and other improvements to a decaying infrastructure. But we also need to maintain images that define New York. And I think this is one of them.