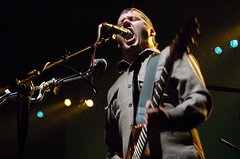 Jackson and I went up to Washington Heights to the newest rock music venue in NYC, The United Palace Theater, to see Modest Mouse last night. We met my friend John and a friend of his and saw a typically great show by Modest Mouse.

It was easy to see the impact of Johnny Marr on the band. The new songs have his signature guitar sound all over them.

But for me, it’s Tiny City Of Ashes and Doing The Cockroach that define a Modest Mouse show. They did them both, in succession, last night and they were raucous as usual. I love it when Isaac gets all worked up singing these songs.

I also really enjoyed the live version of Education, a song I like off the new record.

Education – Modest Mouse – We Were Dead Before The Ship Even Sank