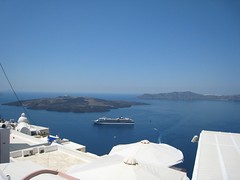 The "Caldera" From Fira
Originally uploaded by fredwilson.

This island is magical for sure.

The signature look is off to the west where the volcanic eruption caused the steep walls that line the western edge of the island.

The "island" in the distance, on the other side of the cruise ship, is what’s left of the volcano, including the crater. I think its dormant now. At least I hope so.

The white and blue you see in the postcards and travel brochures is really just the way it is. And it’s great.

Discuss on Twitter
View Discussions
#Blogging On The Road
Jul 31, 2007

Bug - Slowly Coming Out Of Stealth Bug Labs is certainly our most "out there" investment. Some of our investors have a hard time getting their head around it. Brad, who led this investment for us, is always very careful to explain that this is really a software/services bet, not a hardware bet.

But Bug is launching with a hardware product, The Bug, and they are going to launch slowly and ideally without too much hype and expectations.

The company has been in stealth mode for the past year and, in anticipation of the launch this fall, is now slowly coming out of stealth.

They started last night with a small dinner in San Francisco that included some well known bloggers. Dave Winer was there and has blogged his thoughts. There’s a lot more to Bug than what Dave captured (probably on his napkin) but the parts that Dave got, he got right. Thanks Dave for putting your thoughts out there. I hope the others will too.

The thing about Bug is that it’s not anything like the iPhone. It’s closer to Ning. It’s all about what people will make with a Bug, not what a Bug is when it comes out of the box. And I like that.

My "Out Of Office Message"

I’ve been thinking about turning on the "out of office notification" in Entourage.

But then I realized that I don’t need to.

Because I’ve been posting the news of our trip on this blog and via Twitter and the net result is my inbound email has slowed to a trickle.

Wonderful. And thank you. 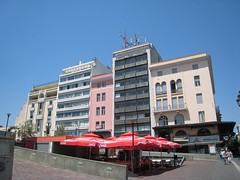 We spent a couple days in Athens.

The Gotham Gal was advised by quite a few people that two days would be enough.

I think maybe for the standard tourist visit, two days could be enough, but I left this morning thinking that I have to come back. But this time for a deep dive with some locals or people who know the inside track on Athens.

I love cities and love exploring them.

We had four meals in Athens. Two in fancy restaurants with mostly westerners and two in local haunts we found on our own where we were the only tourists. You don’t even need to ask where the best food was. You know.

And so that’s why I want to come back and do a deeper dive at some point. Athens is a cool place that I didn’t get to know well enough this time.

Discuss on Twitter
View Discussions
#Blogging On The Road
Jul 30, 2007

Alex Iskold is blogging his way through the startup experience. His company, Adaptive Blue, is a Union Square Ventures portfolio company. But you might know him better from his insightful posts at Read Write Web.

Today, Alex has a post on the Adaptive Blue blog talking about what he’s learned so far working the conference circuit. I could take exception to some of his suggestions and comments, but in general it’s a good post and one that all startups should read, comment on, and reblog. There’s a lot of learning out there to be shared. Thanks Alex for sharing yours. 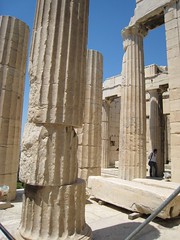 Columns on the Acropolis
Originally uploaded by fredwilson.

We hopped on the subways which are great in Athens and got off at the Acropolis stop. A block away was the entrance to the trail up. It was simple. Athens is an easy place to be a tourist.

The Acropolis is everything you’ve ever thought it would be. A tourist spot supreme for sure, but the people just blend away when you approach the majesty of the old temples on the hill.

I took dozens of photos including all the classic scenes we’ve all seen in postcards and magazines.

But my favorite is this shot through the columns I shot on the way back down through the Proplylaia. It captures the majesty of the place for me.

Discuss on Twitter
View Discussions
#Blogging On The Road
Jul 29, 2007

Athens From The Rooftops 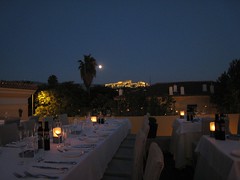 A view of the Acropolis from dinner
Originally uploaded by fredwilson.

It was either Emily or Jessica who said it yesterday.

"Athens is prettier from the birds eye view"

We had several of them yesterday, from the bar on the rooftop of our hotel and at dinner where we got to watch the moon rise over the hill and then settle over a lit up Acropolis. That was some show to watch while eating dinner of fish, fish, and more fish.

Today we hike up to the ‘the sacred rock"

Discuss on Twitter
View Discussions
#Blogging On The Road
Jul 29, 2007

How To Entertain Yourself On A 10 Hour Flight

First of all I slept for at least five hours of the flight to Athens yesterday (or was it Friday?).

But for the rest of the ride I listened to a bunch of Jens Lekman tracks that a reader named Matthew delivered to me last week via YouSendIt.

I Saw Her In An Anti War Demonstration – Jens Lekman

The Opposite of Hallelujah – Jens Lekman

When I first heard Jens, I immediately thought of The Magnetic Fields, but after 5 hours of listening on the flight to Greece, I think he’s more like Jonathan Richman. Which of course is very cool with me!

I’ve done that a few times on this blog, both times related to email overload. It’s a dangerous thing to do. Bankruptcy is a loaded work, particularly coming from someone who’s in the money business. The media loves to run a headline with the word bankruptcy in it. I still get pinged by journalists wanting to talk to me about "email bankruptcy", a term I did not coin, and I’ve been working hard to distance myself from.

So it was with mixed feelings that I read Jason Calacanis’ post declaring Facebook bankruptcy. Jason’s as media savvy as they come, particularly new media. So he knows exactly what he’s doing with that post. He’s drawing attention to the problems with Facebook that have gotten glossed over as the techcrunch 50,000 have fallen in love with Facebook in the wake of the opening up of the service.

Jason put a picture of his Facebook request roll on his post. So I’ll do the same. It’s nutty. I manage my requests daily. And yet I’ve got 182 unanswered requests. It’s as bad as my email inbox, but at least my inbox has good stuff in it along with the crap. The ratio of good stuff to junk is a lot worse in Facebook, at least so far.

But here’s where I differ from Jason. I’m not giving up. Because I think Facebook’s an important phenomenon, maybe as important as Google over time. That’s a big maybe, but you have to pay attention to maybes.

There’s also the issue that all of us who have been building and/or investing in web apps for the past 10 years are facing. Do we have to learn a new bag of tricks? Does Facebook mean all that work we’ve done on the web is suddenly worth a lot less and we need to retool our work for Facebook? I bet that is part of what is bugging Jason. He’s building a new search service, people powered search, on the web at Mahalo.com. Does he need to scrap that and build it at http://apps.facebook.com/mahalo/? I think the answer is no, but he sure better figure out how to let Facebook users access Mahalo from within Facebook and also how to tap Facebook users to build new serps on Mahalo.

Giving up is not the answer. As much as it feels good. Our mutual friend Tom Watson has some words of wisdom for Jason. Get through the bankruptcy Jason and come out the other side with a clean balance sheet and give Facebook another shot. It’s going to be worth it at some point.

Jason has also closed comments on his blog. I’ve said my piece on that before too. That’s not the right answer. Take some time off from blogging Jason. It’s exhausting. Blogging and running a company at the same time is a ton of work. You might need a vacation from blogging. You certainly can’t take a vacation from Mahalo.

It’s called email me instead and it places this button on your Facebook profile.

It would be even better if it placed that button right in the Facebook messaging window.