How Not To Reach Me

I know that I’ve talked a lot on this blog about the problems I am having with email. So quite a few people have taken to messaging me on LinkedIn and Facebook. Please don’t do that. I don’t respond to Facebook and LinkedIn messages. Frankly I find them problematic for different reasons.

LinkedIn – there is this whole structure to a LinkedIn message that I don’t like and never have. You have to allow someone to contact you. It takes time and energy. I’d rather LinkedIn just provide my email. It’s on my blog after all.

Facebook – I get an email telling me there’s a message waiting for me at Facebook. Why not put the message in the email and put the person’s email address in the reply to field so I can reply like an email? Again, it’s easier to send me an email.

I just turned off all Facebook notifications this morning and would like to do the same with LinkedIn if I can do that. As bad as email is, it seems like it works better for me than the alternatives.

What Happened To "Skip This Step"?

It used to be that when I accepted a friend request in Facebook, I’d get a choice of about a dozen ways I know somebody. I never once filled it out. I always clicked on "skip this step" and moved on.

Recently (in the past couple days?), that screen changed in my Facebook account and I can’t "skip this step" anymore. Now the choices are "request confirmation" or "cancel" (see below).

Did I do something accidental or did this change in everyone’s accounts? If so, why?

UPDATE: Based on the comments I am getting, it’s not me. This is truly annoying. I get a lot of friend requests. Adding several more steps to the confirm is a pain in the rear. This combined with the facebook spam that’s taking over my email inbox is getting me damn close to leaving the service entirely. Maybe LinkedIn is the adult Facebook after all.

Dave Winer’s got a post up talking about the concerns he has about FeedBurner that have grown since the acquistion by Google. Dave’s a smart guy and is a big reason we have RSS in the first place. So you have to take his concerns seriously.

But as a former investor in FeedBurner and an active user of the service, I don’t share his concerns. I point you all to this post on the FeedBurner blog from June 2005 where FeedBurner explained how easy it is to leave the service if you ever decide to do that.

That gives me all the comfort in the world. I love it when services make it easy to leave. When they do that, I tend to stay.

No Conflict, No Interest

That’s a John Doerr quote that I often use. And this post reeks of conflict of interest. So I’ll disclose that right upfront. I am an investor in both Indeed and comScore.

TechCrunch has a post up about Indeed’s competitor Simply Hired’s use of WhenU to drive traffic to it’s service. Until recently, Indeed had about three times the audience of Simply Hired. In the past couple months, Simply Hired’s numbers have been on a sharp increase. Now there are a bunch of services in the jobs space on the web. So it’s not necessarily a good thing to focus on just Simply Hired and Indeed. There are a lot of places to go to find jobs on the web. But I personally think the job search services like Indeed are the best way to find a new job.

What’s most interesting to me about this post is not the question of whether popups/popunders are a good audience acquisition strategy (it is not). It’s whether UVs seen by virtue of popups/popunders should count in a service’s UV count.

It seems that Compete, Alexa, Hitwise, and possibly other third party tracking services count that kind of traffic. And it seems that comScore doesn’t. If that is in fact true, then it’s one more reason why comScore’s data is better. 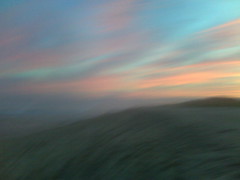 I took this photo with my Blackberry Curve last night on the beach at Sunset.

I was moving too fast and it came out blurry.

Discuss on Twitter
View Discussions
#Photo of the Day
Jul 21, 2007

In the Internet giant’s view of the future, consumers would buy a
wireless phone at a store, but instead of being forced to use a
specific carrier, they would be free to pick any carrier they wanted.
Instead of wireless carriers choosing what software goes on their
phones, users would be free to put any software they want on them.

What would be really cool is if Google paid $4.6bn for the spectrum and then opened it up for the world to use as we see fit, just like Facebook opened up their platform.

It’s gonna happen. I can feel it.

This scottish band sounds like Belle and Sebastian which is a big compliment in our house.

If you like the sounds of Camera Obscura, check out their most recent record Let’s Get Out of This Country

Facebook continues to impress, buying one of the most interesting Bay Area startups, a company called Parakey that has developed technology for persistent web apps.

Persistent web apps are certainly one of the next big things. If the technology works, the web will be like desktop software. Imagine using gmail like you can use thunderbird or outlook on your desktop. Google is developing something called Google Gears that is similar. Google describes Gears as "enabling offline web apps".

Adobe has developed a technology called AIR that also promises to provide persistence to web apps. I am not technical enough to describe how all these various technologies differ from each other. I am sure there are important differences between them.

But what’s important here is that the web is going to be an operating system with direct access to your device and you’ll be able to use your web apps even when you aren’t connected to the web. This is going to result in a whole new wave of innovation. And that’s a big deal.

Back to Facebook and Parakey. I said Facebook would sit tight in an earlier post this week. Clearly they aren’t going to sit tight. But it’s also clear to me that they are thinking like Google not MySpace. They are building a big platform play here. And I just don’t think that kind of thinking leads to a sale transaction anytime soon.

The founders of Parakey include Blake Ross, who is credited with much of the seminal work on the Firefox open source browser. Parakey is also open source. So does that mean Facebook is going to open source its "social operating system"? I think so. Cool. Put your seatbelts on. This is going to be a fun ride.

I am headed up to westchester county this morning to participate in a panel discussion on "consumer behavior on the internet – behavioral targeting and lead generation". It’s an area I’ve written extensively on over the years but not much lately.

Facebook doesn’t seem to have tried too hard yet to maximize the value
that they can get from ads. They know so much about me that they could
do as well or better than google with targeting; most of the ads shown are inane

Of course that is true. It’s the "new media deal" as Matt Blumberg coined the phrase in this post from August 2004.

The New Media deal is that … consumers are willing to
share a certain amount of personal information in exchange for even
better content, more personalized services, or even more targeted
marketing — again, as long as those things aren’t too intrusive and
provide adequate value.

The thing that is so interesting to me is that the Facebook generation doesn’t resist the new media deal for privacy concerns, they embrace it. They don’t fear the targetting, but they sure hate the "inane ads". I do too.

My day has bothered me without a new post on AVC

Well that’s nice of you to say Kendall, but nobody is bothered more than me by a day without a post. It means I’ve basically had not a minute of free time all day to write. And I hate that.

I am headed out to a cool dinner that I might blog about tomorrow. But I thought I’d say a few things:

1 – Nick and his crew should stop trying to out Fake Steve Jobs. The FSJ blog would be a lot less fun if it wasn’t anonymous.

2 – eBay put out Q2 numbers today and is doing great. Remember the meme (see I can learn to love this word) a year or two ago that Google was going to kill eBay. Doesn’t look like it to me.

That’s it for now. Gotta go meet some entrepreneurs in Williamsburg.